Panagia Hozoviotissa: the oldest monastery in the Cyclades

Amorgos holds a prominent place among the Aegean Orthodox pilgrimages. The monastery is hanging on towering cliffs, in a barren and inhospitable landscape above the sea and looks like an eagle's nest.

Tour of the monastery

You can get by local transport or your vehicle, there's a parking available. The monastery welcomes you with an icon of Panagia Hozoviotissa at the entrance of the stairs.

Going up, you'll see the big blue of Amorgos. An immense blue where the fierce winds paint on it, waves and ripples, and you'll hear the noise of the stormy sea. You'll feel lighter from anxieties during your visit, no words can describe it.

Its location is at a height of 300 meters and is visible only from the sea. Despite the landslides, no one has ever been hurt because Panagia protects monks and visitors.

Take care to be dressed according to the rules, otherwise, you'll have to cover your legs and shoulders with clothes provided by the monastery.

Finally, you'll stoop to enter through the low, narrow doorway to meet God, as tradition says. 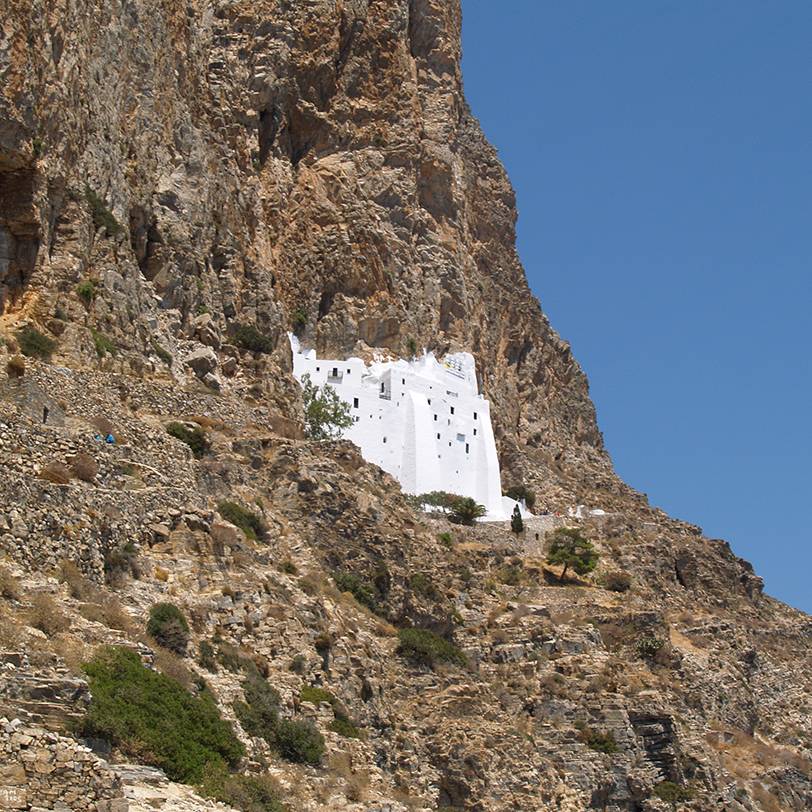 What you will see inside

It's an 8-story building, 23 meters high. The distance between the exterior wall and the rock is only 5 meters. Space is limited, and the stairs are very narrow, but the layout is particularly functional for human needs. It's mentioned often as the triumph of man over the harshest conditions of nature.

Once again you'll admire the big blue and the cliffs, on the balcony on the rooftop of the monastery. 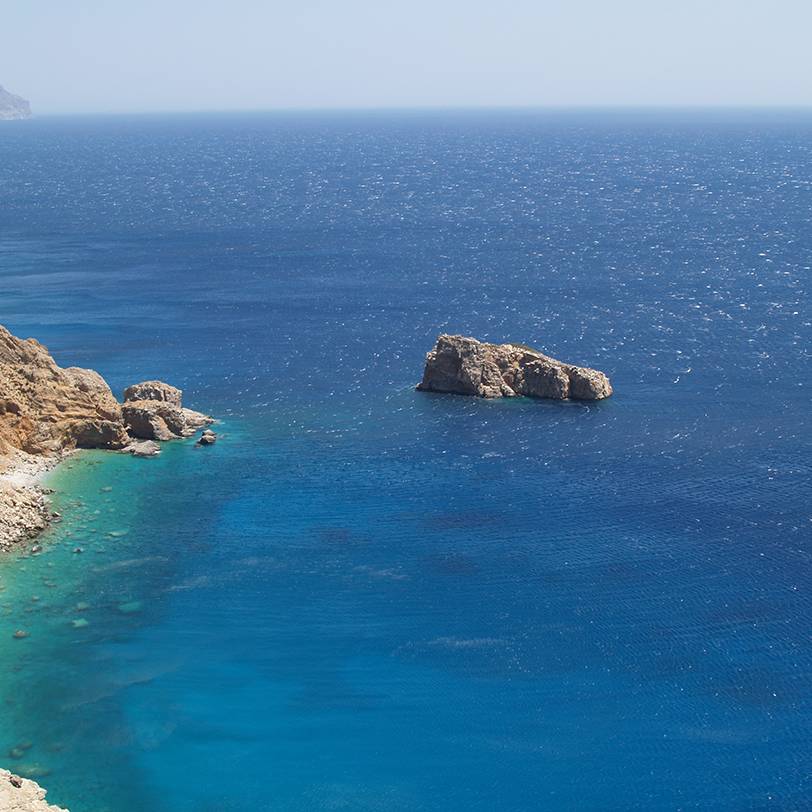 History of the monastery

It was first erected in the 9th century and second in the late 11th by the Byzantine emperor Alexios I Komnenos. It's the most ancient monastery in the Cyclades and one of the most ancient in Greece.

Iconoclastic period. The travel of the icon from Palestine to Amorgos

The 8th century was an agitated period in the Byzantine Empire, the iconoclasm had forced many icons from the eastern parts of the Empire to find refuge in the Aegean islands.

The icon of Panagia Hozoviotissa was in the monastery of Choziba in Palestine, in the Judaean desert, until the 8th century when the Arabs plundered it. The monks escaped and wandered on a boat in the unknown until they encountered the south side of Amorgos.

The view of the cliffs reminded them of the scenery of the desert. So they disembarked, according to the legend, to the beach of Agia Anna to build a new monastic community.

The founders chose at first a spot close to the sea, but what had been built the day before, had mysteriously collapsed by the next morning. Finally, Panagia indicated the spot she wished for, by moving the tools of the workers to the present place of the monastery. Nothing survives from this first building.

The present-day building is the new one ordered by the Byzantine emperor Alexios I Komnenos as written records and relics testify. Many privileges were also granted.

After the Byzantine Empire

The monastery enjoyed the respect of all the conquerors of Amorgos, Francs, Venetians and Turks. Despite the pillage of its heirlooms, it retained its fortune and putted great effort against proselytism of the inhabitants of the island. Many heirlooms have also been destroyed due to natural causes, careless renovations and the wear of time.