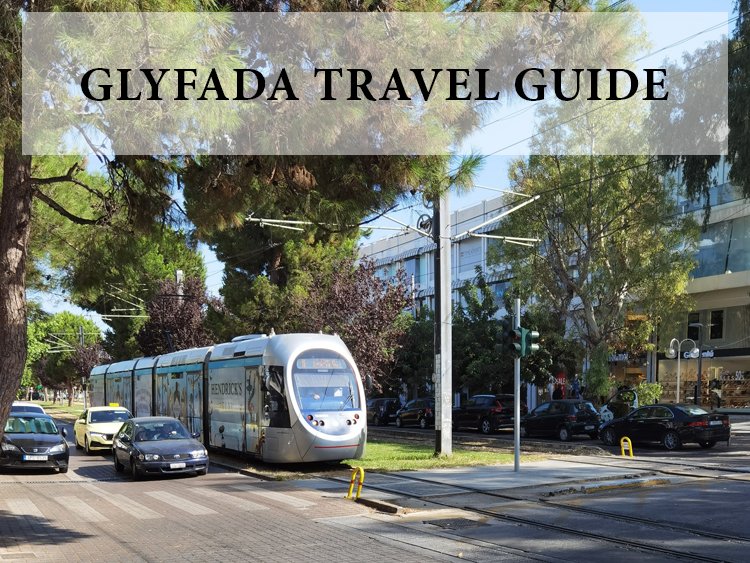 Glyfada is not just a coastal suburb of Athens but a central city in the southern suburbs with its own culture that makes it stand out from the rest of Athens. On the one side the sea and on the other the mountain range Ymittos give it a beauty that you do not easily find in Athens.

Whether you visit Glyfada for a walk, shopping, night out, holidays or for a getaway to the beaches of the Athenian Riviera you'll find plenty of things to do.

So what's special in Glyfada apart from the beach? There are cafes, bars, restaurants, fast foods, cinema, bowling, pizzerias, sushi bars, pastry shops, clothing stores and many other related stores. And all these gathered so that you can walk them.

First of all you need to know how to walk Glyfada to find what you want without making useless circles.

The walks most times begin from Agios Konstantinos, the church with the characteristic white domes since there is a parking lot and is the entrance of the city from Athens and Piraeus.

Walking towards the center you'll encounter the best fast foods in the city: Goody's Burger House, Kentucky Fried Chicken (KFC), Everest, Spitiko Apla for souvlaki and McDonald's (at the junction of Metaxa and Poseidonos). A real paradise for fast food lovers, the place where you can eat Big Mac, greek burger, souvlaki, hot dog, sandwiches and KFC chickens. 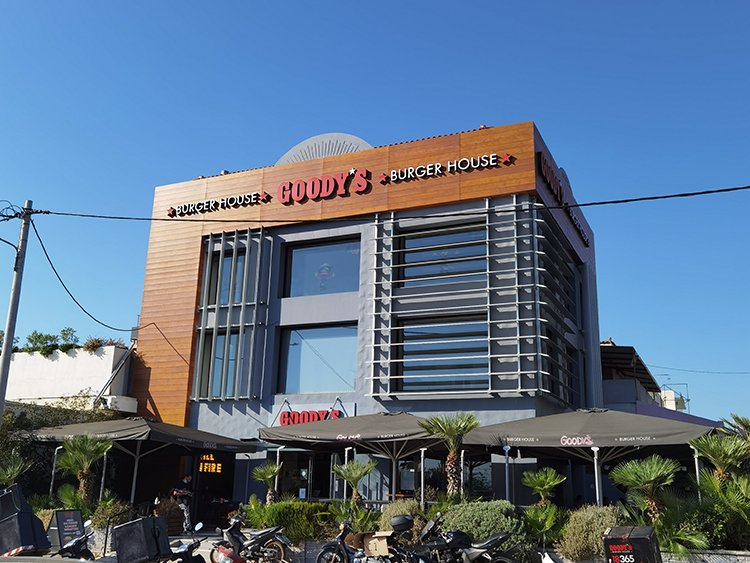 Goody's Burger House at the beginning of Metaxa Avenue

From Goody's begins Konstantinoupoleos Street, the well-known to the locals Biftekoupoli (city of burger). Personally I don't recommend eating there because the food is a tourist version of the greek traditional food at exorbitant prices. Anyway as the name implies it is known for its burgers and not for any other specialty.

The Tram lines cross a circular road that is none other than Metaxa Avenue, the most central road and the heart of Glyfada. Busy with large sidewalks and plenty of greenery, you'll find there several clothing stores and small malls, the plazas as the locals call them.

You continue the walk at Metaxa following the Tram lines, you pass from several clothing stores with beautiful shop windows that are worth to take a look. 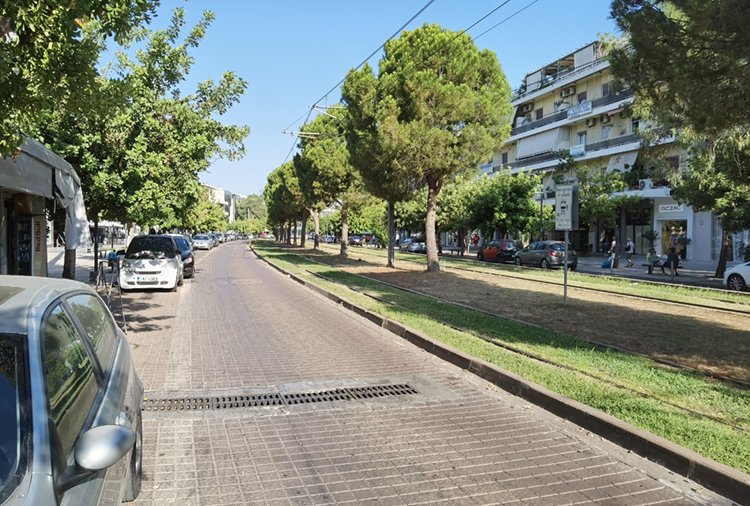 Metaxa Avenue with the Tram lines

The first major junction is with Lambraki Street. Upwards through a pedestrian street you reach a large playground for young and older children with plenty of toys to play for hours.

Downwards Lambraki you'll encounter Starbucks, it's worth a stop for the favorite frappuccino caramel or for mochaccino, TGI Friday's and then you reach Asteria and from there you can continue your walk on the beach.

Continuing Metaxa, as the Tram lines go, at the next junction is Zisimopoulou Street, well-known for the cafes and the cinema. There you'll find Kayak with the excellent ice creams and sweets, Baron, Living cafe - bar - restaurant, Mr. Puffs Dessert bar and Town Cinemas, the cinema of Glyfada. 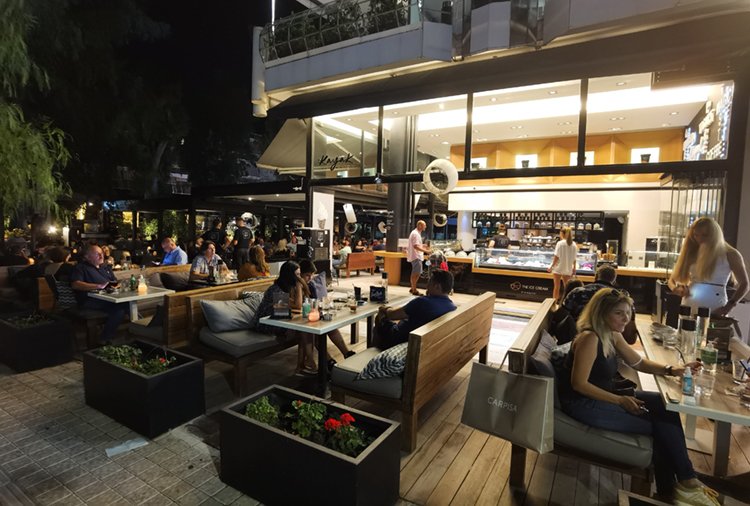 Kayak at Zisimopoulou for ice cream and dessert

Over Zisimopoulou is Esperidon Square with a playground, Starbucks and various other stores.

After Zisimopoulou there are only scattered stores with the main point being Nymphon Square where you'll find a chinese restaurant, mexican, italian and sushi bar. 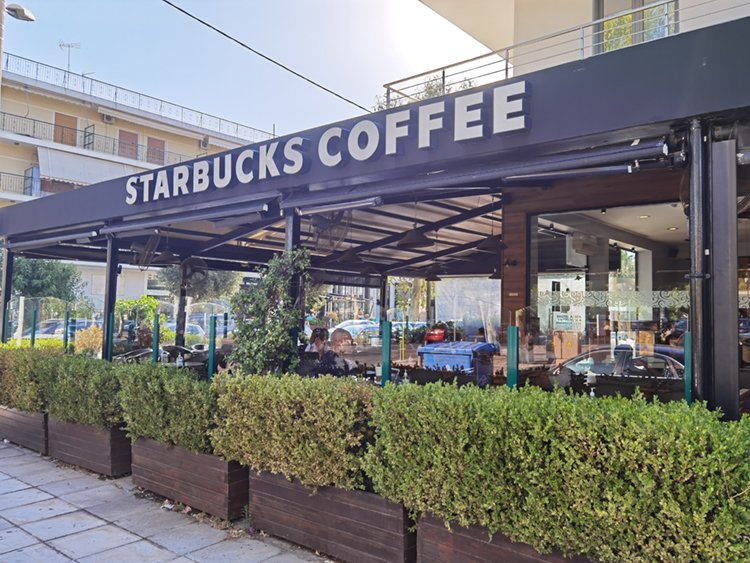 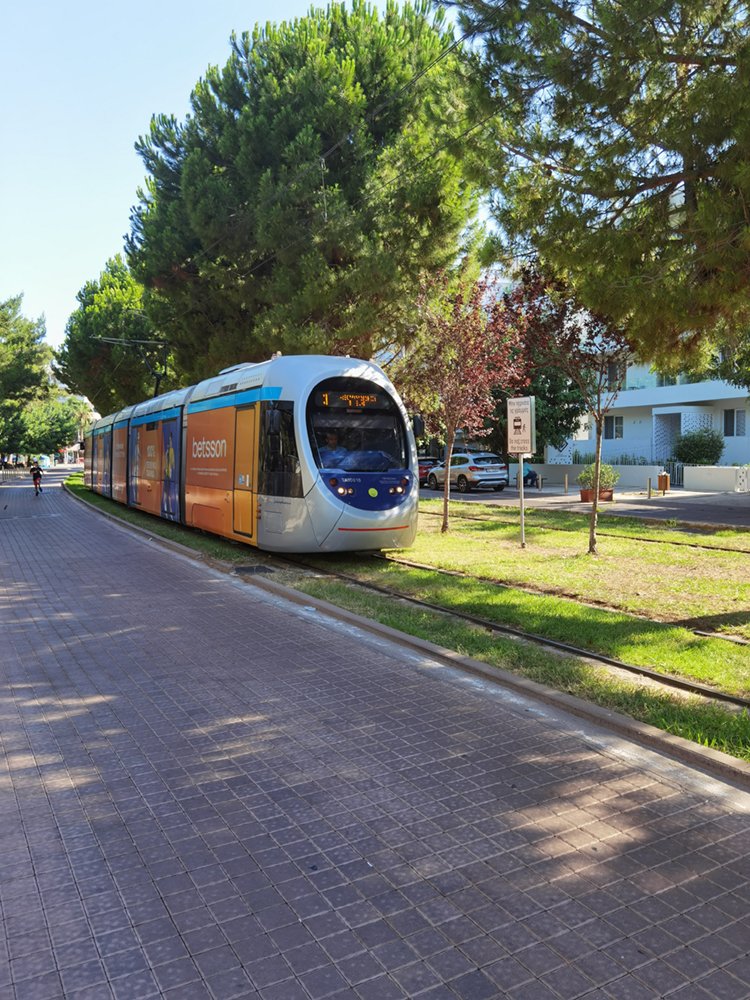 For your transfers to and from Glyfada you can use the Glyfada Radio Taxis. 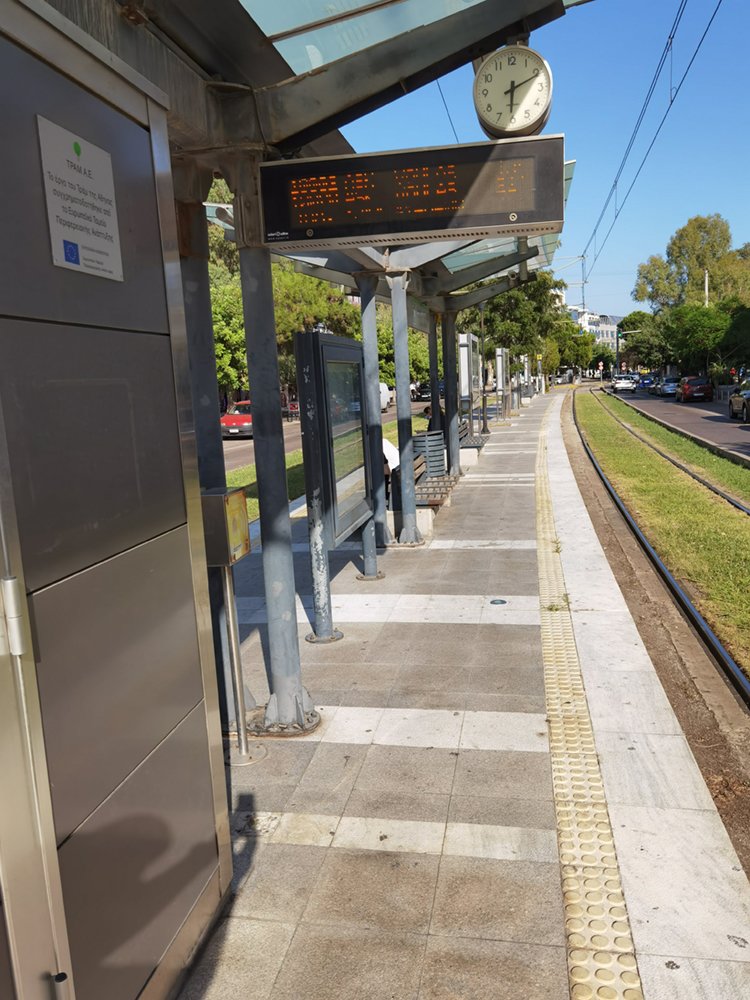 3. When is the best time to visit Glyfada?

During winter Glyfada is not that attractive, a normal thing for a coastal city. Athenians prefer the central suburbs for going out however it still attracts people for shopping and coffee on Saturday mornings.

In spring the weather gets hotter, especially after May, and the athenians seek connection with nature and the sea breeze and now the traffic peaks in Glyfada and Poseidonos Avenue. At this time it's difficult to find an available table especially on Saturday nights. At the same time the beach bars are opening for frantic night entertainment. Traffic in Glyfada lasts until autumn. 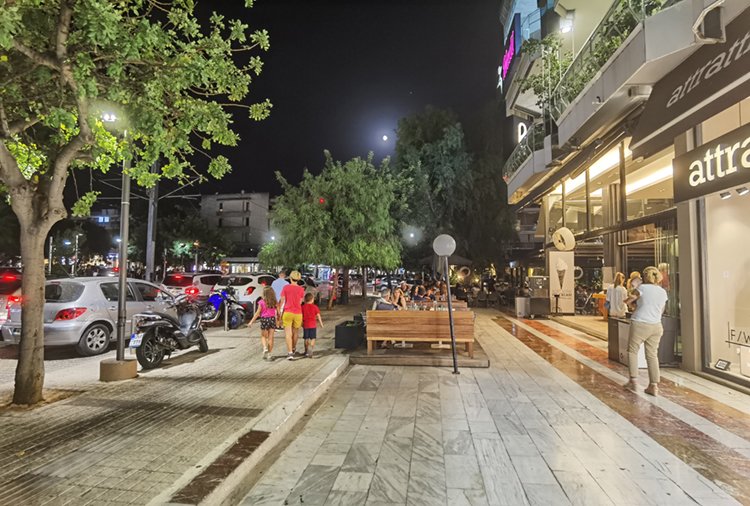 Walking with a summer full moon

If you have young children check this interesting playground

4. How did so many stores come together there?

Glyfada as you may have understood is a mixture of greek and foreign influences and this is not coincidental. Since the 1950s, when the american base of Elliniko started operating, it was the hangout of the american soldiers that were then crowded at Biftekoupoli and the american bars of the city for some entertainment and fast food. It's not an exaggeration to mention that it's the first region in Greece that learned about Coca - Cola and the american burger.

Almost every American fast food that has passed through Greece had a store in Glyfada: McDonald's, KFC, Wendy's, Lebel, Hambo, Applebee's, Dunkin 'Donuts, TGI Friday's. Today only McDonald's, KFC and TGI Friday's remain along with the greek Goody's and Everest.

In the early 1990s, when the americans left Greece, several stores closed, but from the 2000s, a dynamic recovery took place again.

Where to stay in Glyfada - The 7 best hotels 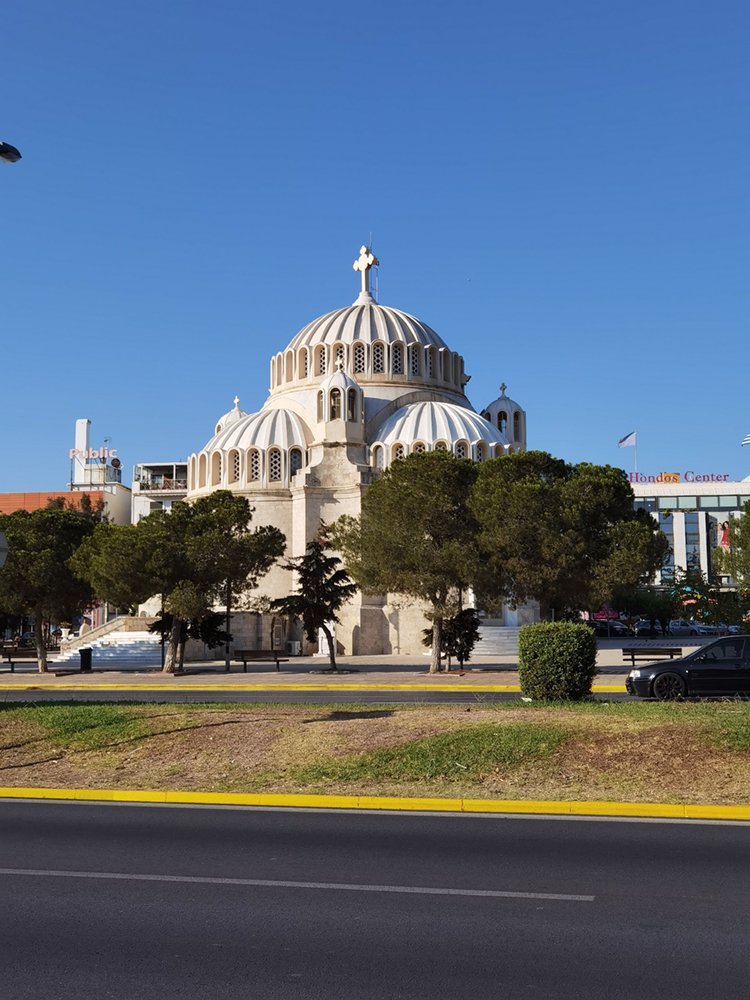 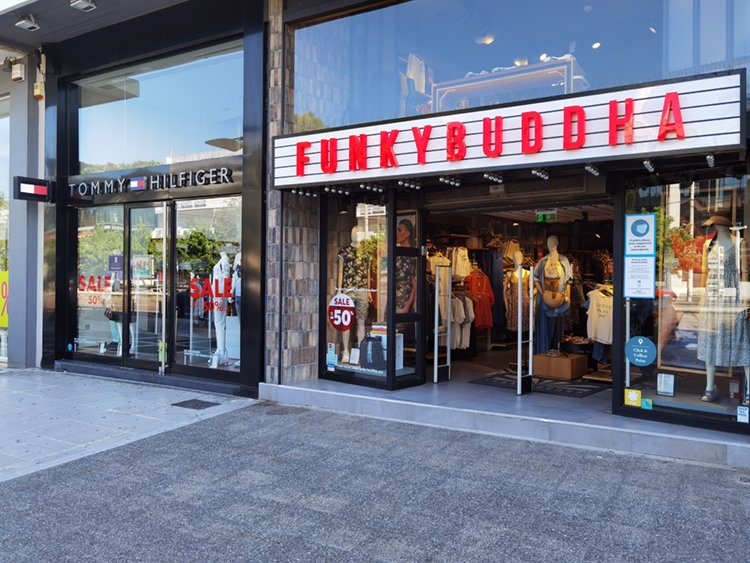 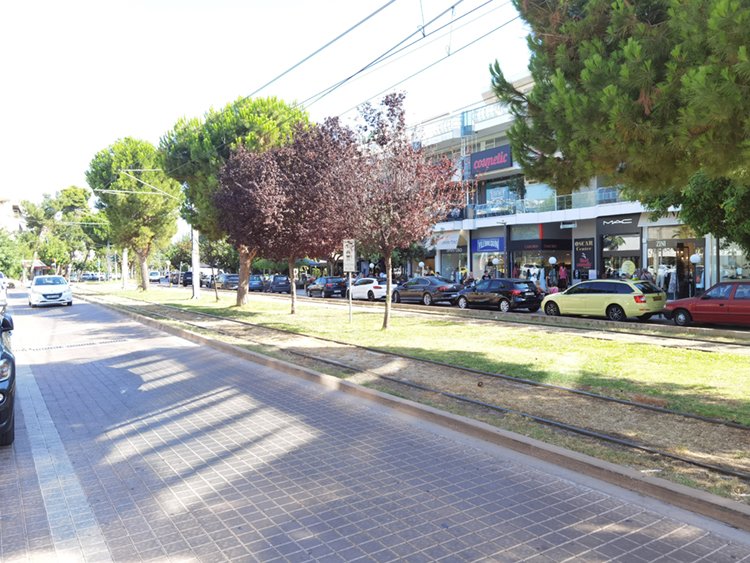 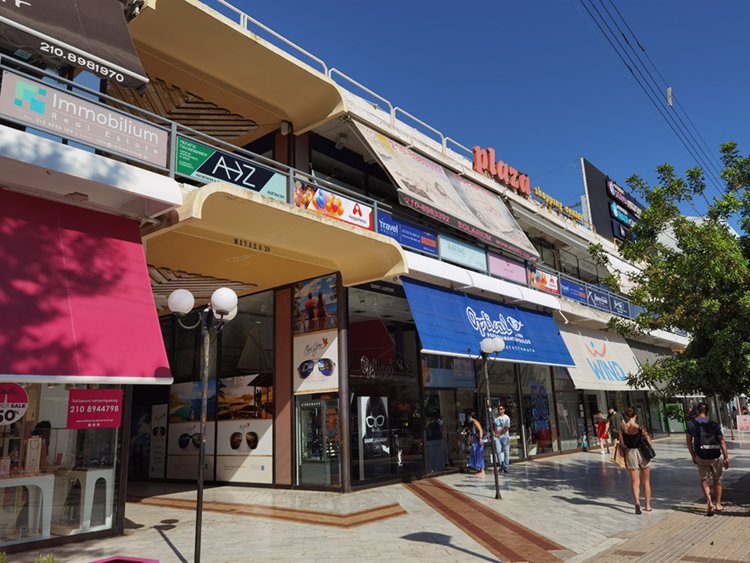 Stores at Metaxa Avenue. The locals call the malls "plazas" because the inscriptions write "Plaza". 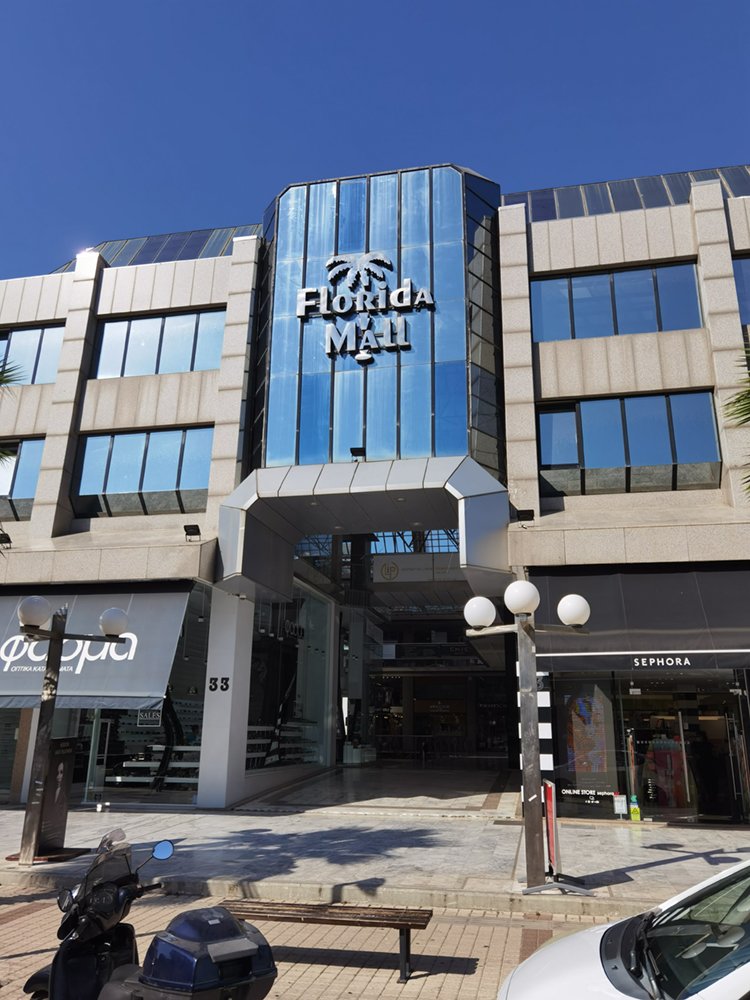 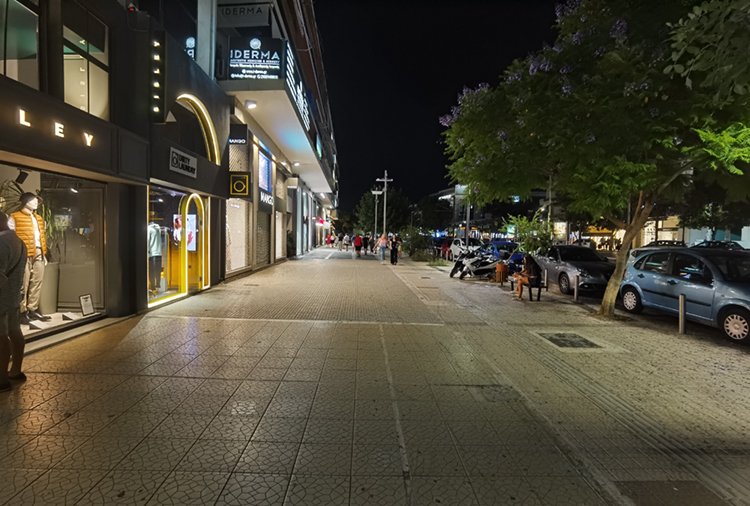 The wide sidewalks of Metaxa 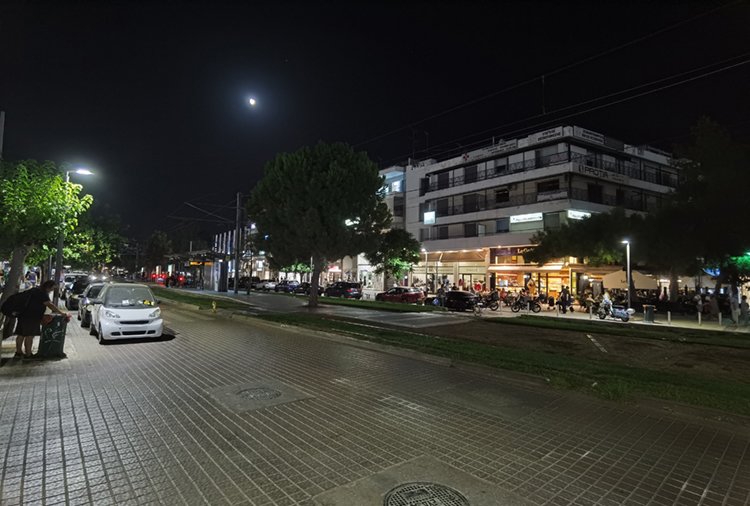 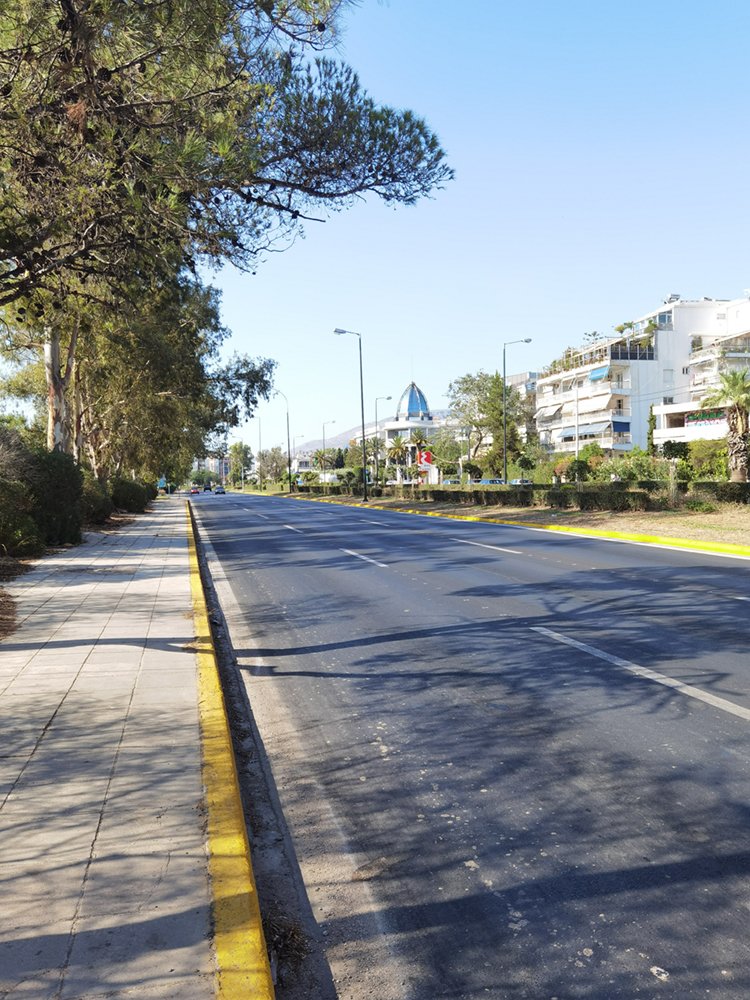