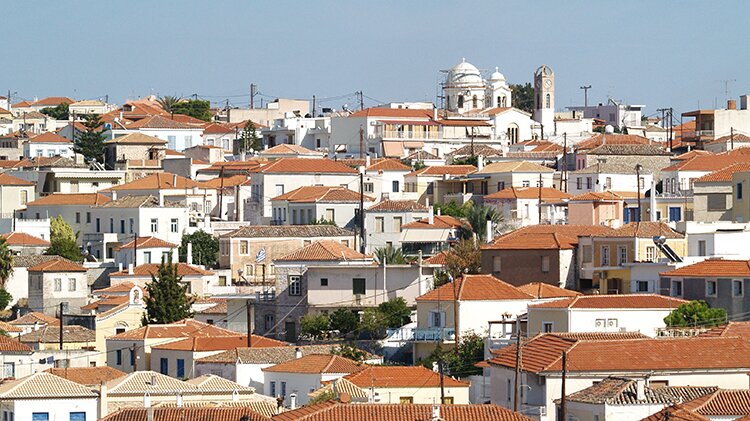 On the way to Porto Heli you pass through Kranidi ring road to see Kranidi spreading over the undulating hills of Agia Anna and Bardounia, but it would deserve more attention because even though it is on the mainland it looks like it came from an island. In any case its architecture is almost the same as that of Hydra and Spetses.

It had a huge maritime boom between 1840-90 when the beautiful sailing ships were sailing the seas of the world. The kranidiotes owned 35 ships of large capacity and 100 trechandiri which transported cargo all over the world. From that period come the mansions of the shipowners which dominate the Lower Neighbourhood, it is said that the mansions were built there to have a view of the bay of Koilada where was the port. 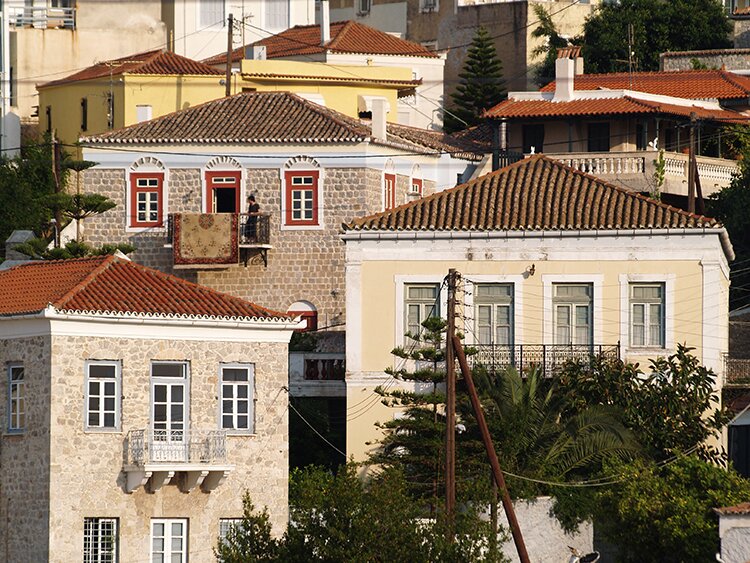 The big mansions of the shipowners

After 1890 sailing ships were replaced by steamships. The kranidiotes then turned to sea sponge fishing. They owned 150-200 sponge fishing boats with divers from Kalymnos island whom they hired. After the decline of this profession as well Kranidi became an agricultural-livestock but it has long been famous for the excellent quality oil produced by arid olive trees. In the last two decades the fields and pastures are been sold for great prices, even millions of euros to build villas of prominent athenians and foreigners. The beautiful undulating hills of Ermionida with their pine and olive groves are sought after for their scenery.

The traditional kranidote house consists of a tall yard fence with a wooden front door, frames, skylight designs above the doors and windows and antefixes. 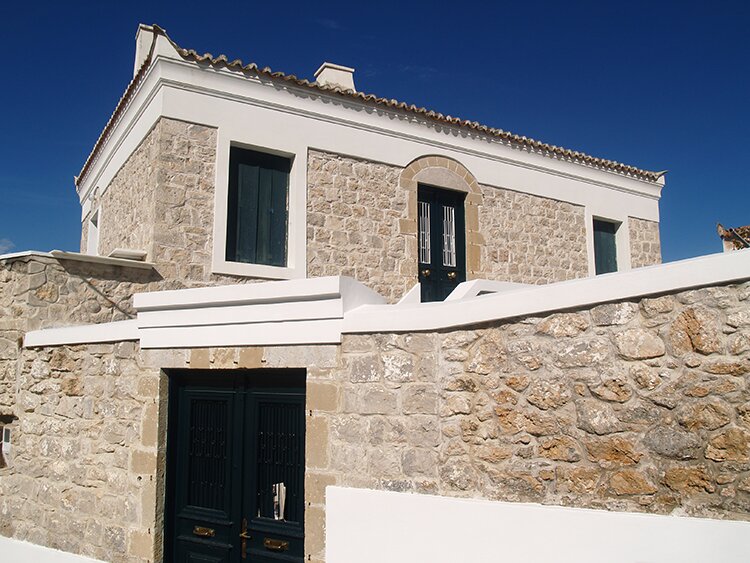 A traditional house in Kranidi

The most important churches in Kranidi are:

The Church of the Holy Forerunner with the icon of Saint John the Forerunner painted by the cretan iconographer Emmanuel Tzanes in 1646. The church was completed in 1873. I was impressed when I went to the divine liturgy by both the rich decoration and a miniature kaiki in a prominent place obviously for security of the fishermen. It is noteworthy that the bell comes from a spanish monastery which was bought by a kranidiote captain in Mallorca, Spain. It is considerably older than the church. 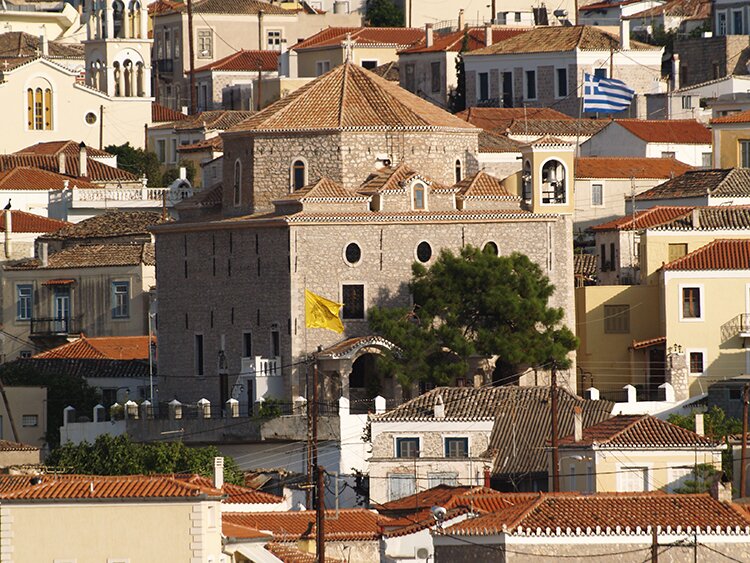 The church of Agios Georgios is built on the hill of Bardounia. It was completed around 1870 and is now operating occasionally. It doesn't look like an orthodox church, I would say it looks like a catholic one. In its place there was an older church related to a failed attempt of the turks to force the kranidiotes to give in to the Sultan. 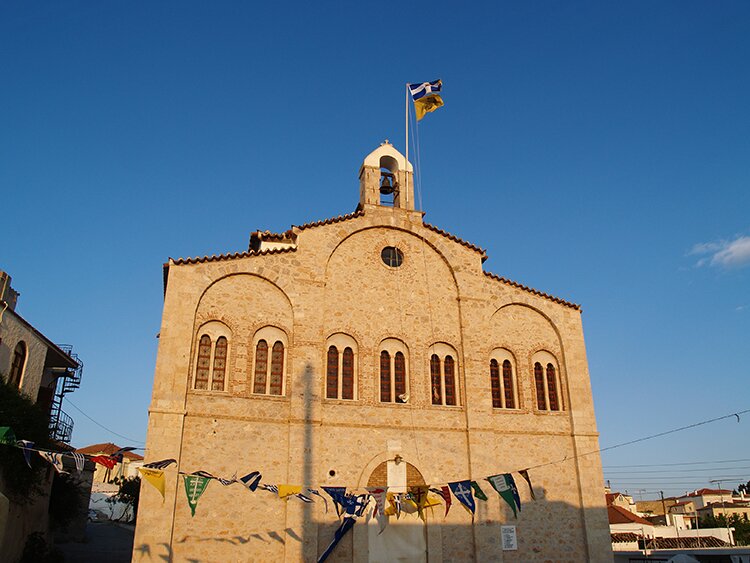 There are two well-known kranidiotes in Greece:

The actor Dimitris Papamichail. He was born in Piraeus by parents of kranidiote descent. He himself lived in Kranidi during the german occupation because things were better there than in Athens. He never mentioned his origin, in his films he was mentioning that he was from Piraeus by birth. He died at the Kranidi Health Center because he happened to be at his vacation home in Ermioni at the time.

Giannos Kranidiotis, former executive of PASOK political party, there is a bust of him in the central square. Although Cypriot his grandfather or great-grandfather had immigrated from Kranidi. Kranidiotis was the family's nickname for its place of origin. 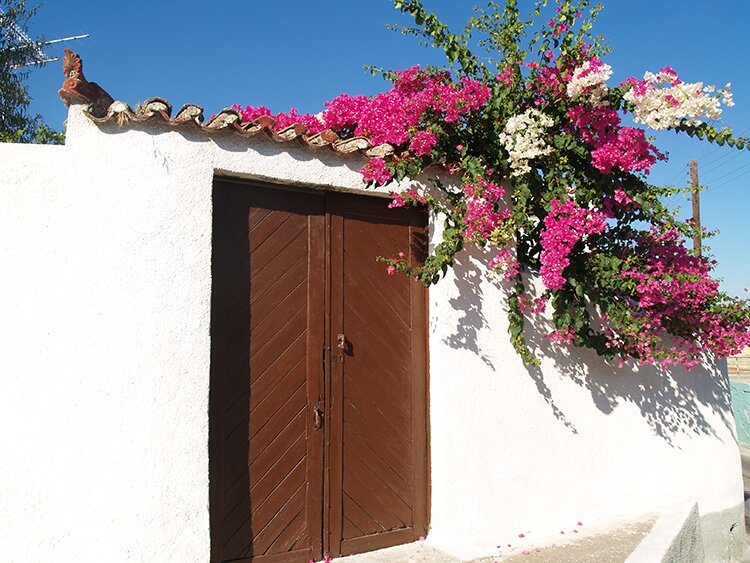 Many houses in the settlement look like an island

Kranidi was settled in the 15th century when the Turks occupied the greek area. One by one every city that fell into their hands created waves of refugees heading towards the free areas. The first settlers were arvanites. They lived on these hills for safety from piracy but also because it has an unlimited view of the entire horizon. A local had told me a story about the pirate raids. On the hills south of Kranidi there is the place called Vigla which is above Ververonda beach. Here, he told me, the berber pirates moored their ships and rode on horses for kilometers into the interior of Ermioninda to plunder. In Vigla there was a lookout that alerted the residents of Kranidi in time to fortify themselves in positions they had specially for such cases.

Toponyms and surnames that begin with or contain -b- are of arvanitic origin. Some of these surnames I remember are Bardis, Bias and Balabanis. 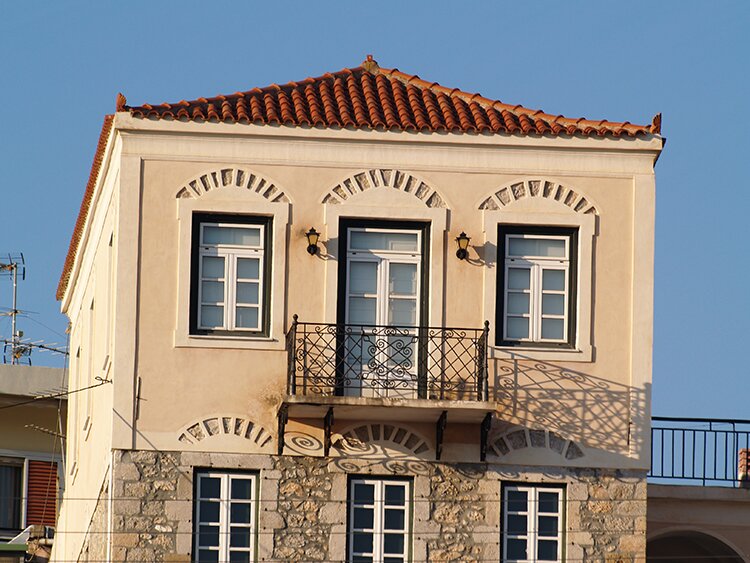 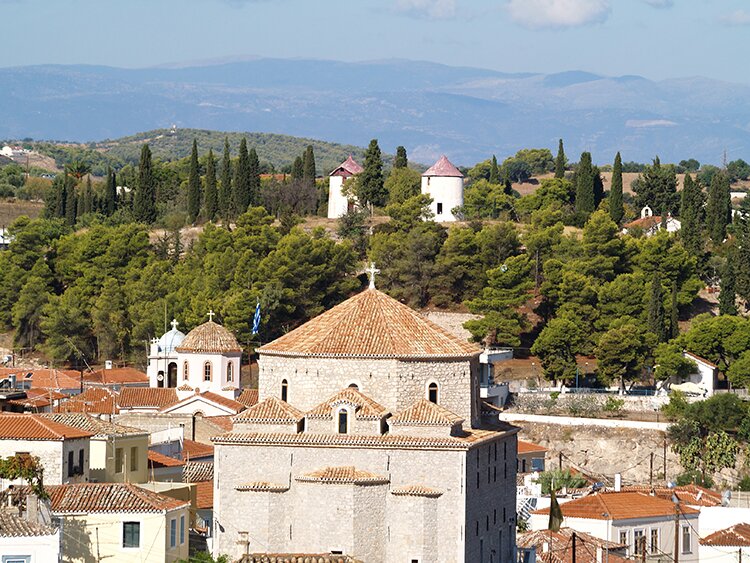 The Holy Forerunner with the windmills in the background