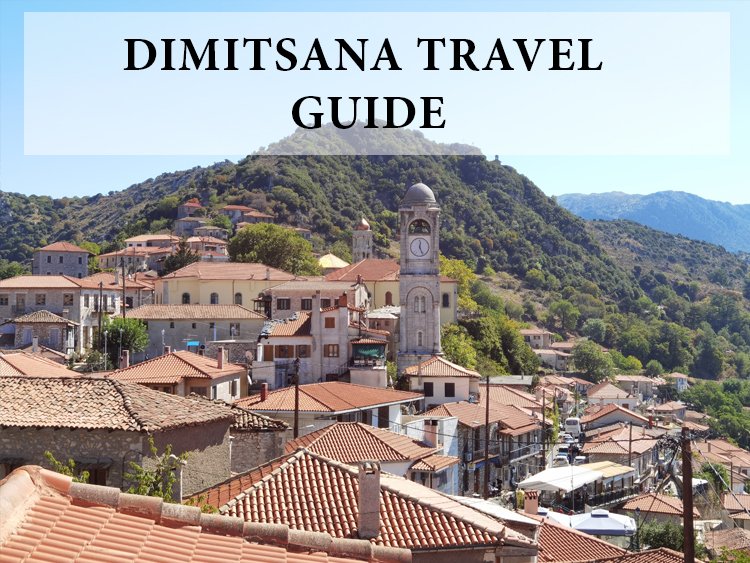 Dimitsana is the most popular destination in mountainous Arcadia, a charming village located literally in mountains and gorges. Built on hills just above the gorge of the river Lousios is a place of tradition, history and natural beauty. It stands out for the stone architecture that can be seen everywhere: in the cobbled streets, in the churches and in the tower houses.

In antiquity there was the city Teuthis which was visited by Pausanias in 174 AD and recorded the information in the book "Arcadian".

Due to its mountainous location there was no turkish presence during the turkish occupation. In the 17th century in Philosofos Monastery, in the inaccessible gorge of Lousios, there was a School and a library. In 1764 they were transferred to Dimitsana where a library and the Theological School of Dimitsana were founded. Many scholars and priests graduated with more prominent personalities being Patriarch Gregory V and Palaion Patron Germanos, both from Dimitsana in origin.

During the 1821 Revolution in the gunpowder mills of Dimitsana the so valuable for the Struggle gunpowder was made. Shrapnel shells, cartridges and gunpowder were made here with the power of water for this and it was named "gunpowder depot of the Nation".

2. What to do in Dimitsana 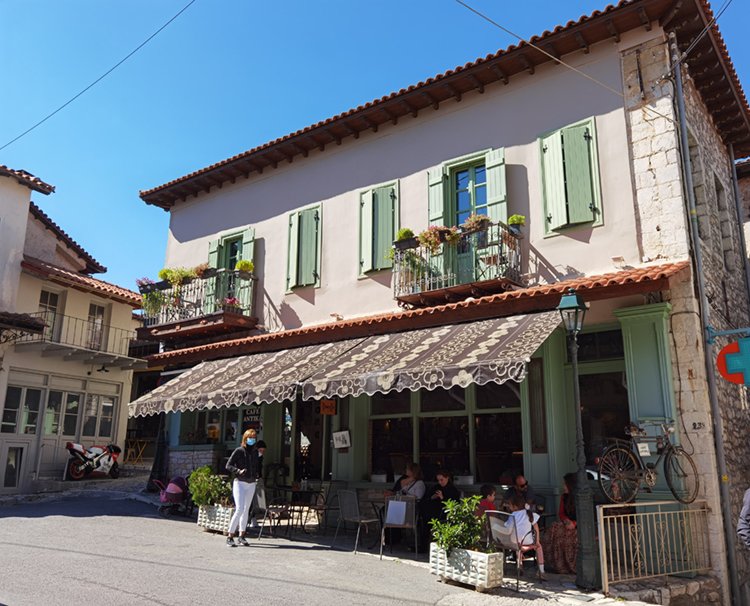 At the center of Dimitsana

The walk in the village starts from the center where all the cafes and souvenir shops are located. Enjoy a drink and a sweet in their warm environment and then get lost in the cobbled streets for exploration. It's worth standing in the square on the side of the road to see from above the gorge of Lousios with a view towards Megalopolis.

This is the paternal house of the Patriarch of Constantinople Gregory V, which has been turned into an ecclesiastical museum and ecclesiastical objects of that time are exhibited.

Here is the School of Dimitsana with the library and the folklore museum, the statue of Gregory V under a plane tree dominating the square and the church of Agia Kyriaki which was built in 1834 with a dome covered with copper sheets. 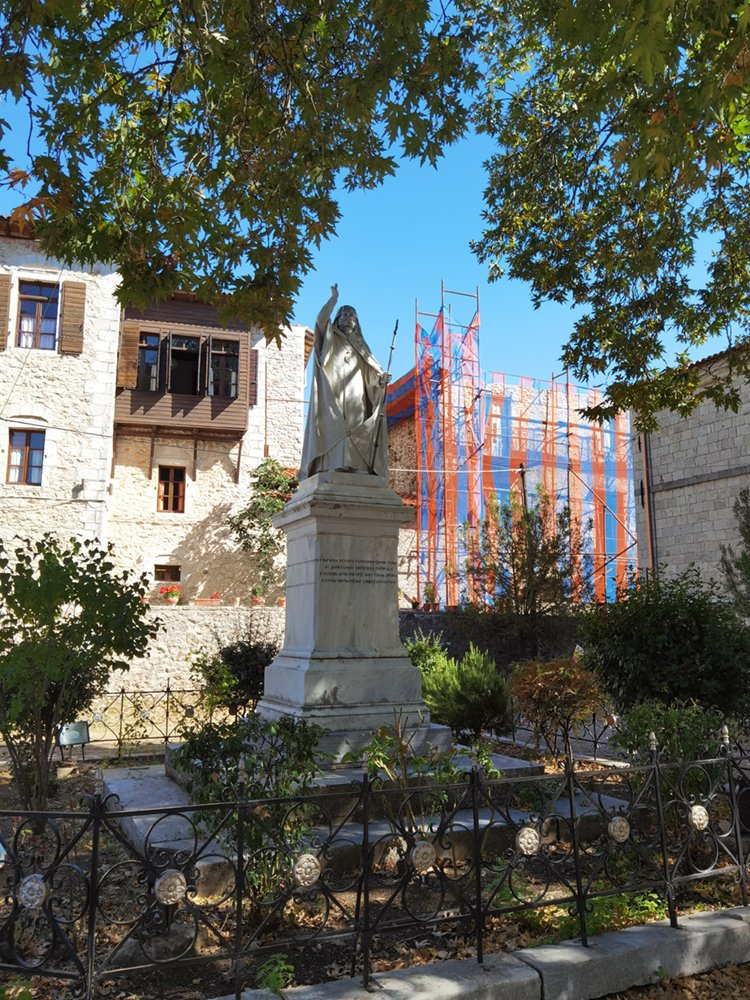 The statue of Patriarch Gregory V 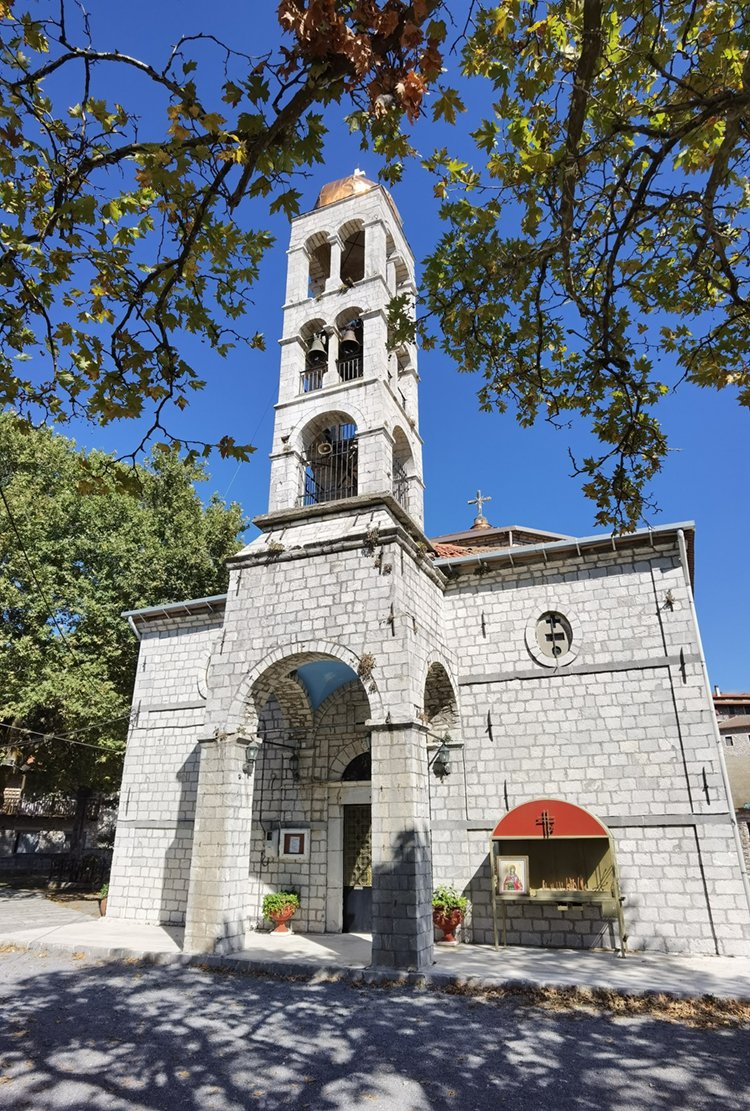 The church of Agia Kyriaki

At the edge of the square you can see up close the Dimitsana clock tower that can be seen from all over the village. The bell and its mechanism were sent as a donation by the Dimitsanites of New York around 1900. In 1934 marble sculptors from Tinos completed the construction of the bell tower which today is the most characteristic image of Dimitsana.

Information about Where to stay in Dimitsana

In the dense vegetation of Lousios, the rushing waters of the spring of Ai Giannis give life to the renovated facilities of the mills for you to see up close the professions of another era when Dimitsana had thousands of inhabitants.

The museum includes water mills that used to wash clothes, a flour mill that ground wheat, a tannery that describes in detail how skins were processed and a gunpowder mill with clubs for the production of gunpowder.

An impressive and unique museum of its kind in Greece that is definitely worth a visit. Of course the visit takes place under the sound of the rapid flow of water.

3. Where to eat in Dimitsana?

4. How to get to Dimitsana?

It's 200 km away from Athens. Get the Athens - Tripoli National Road. After the tunnel of Artemisio you pass the tolls of Nestani and right after there you turn right at the exit for Vytina. Get the main road without turning anywhere, you make the round of Mainalo mountain actually, you pass through Levidi until you reach Vytina. From there follow the signs for Dimitsana.

Dimitsana is an ideal base for getaways to the villages of the province of Gortynia: Stemnitsa, Elliniko, Tropaia, Lagadia and Valtetsiniko. 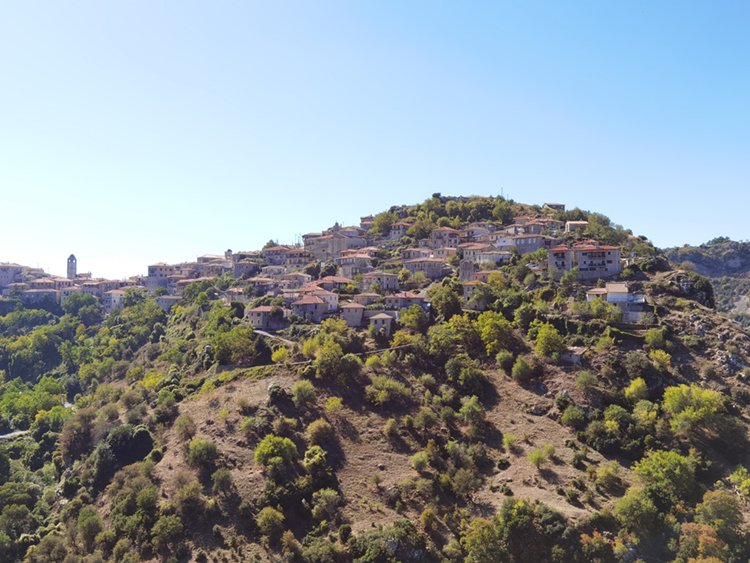 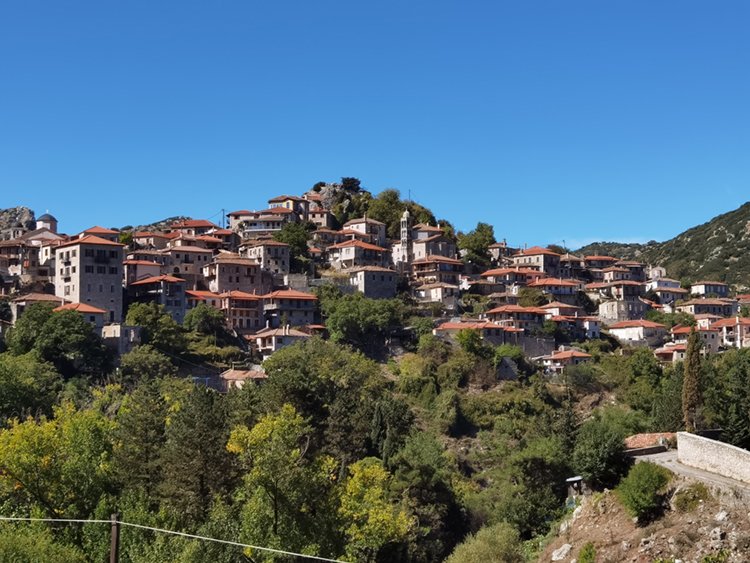 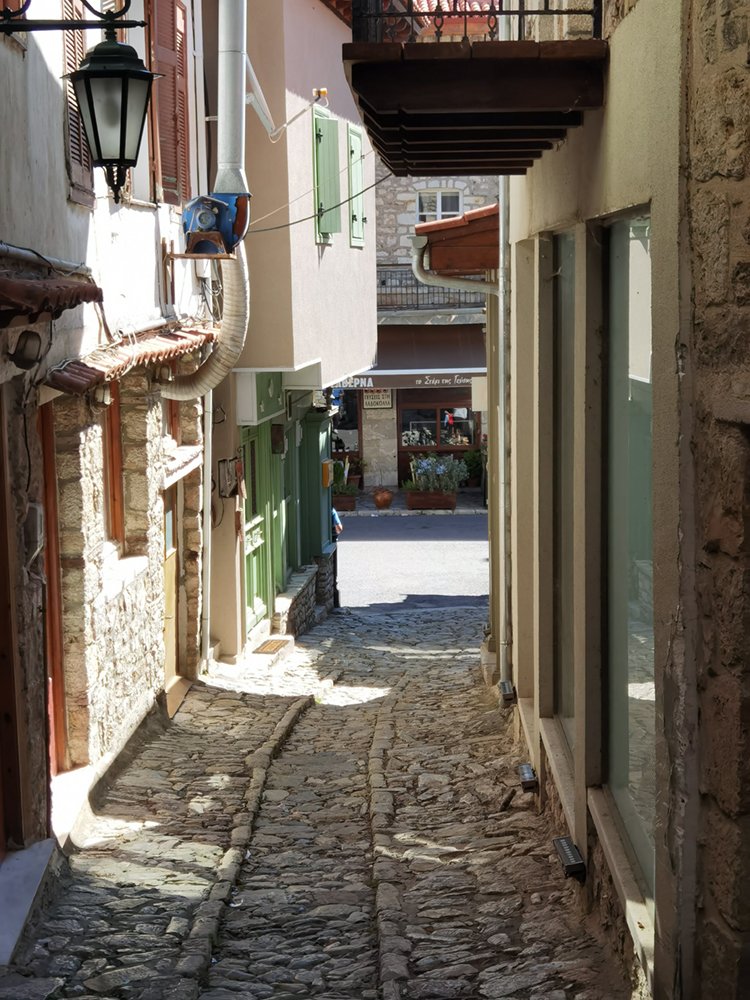 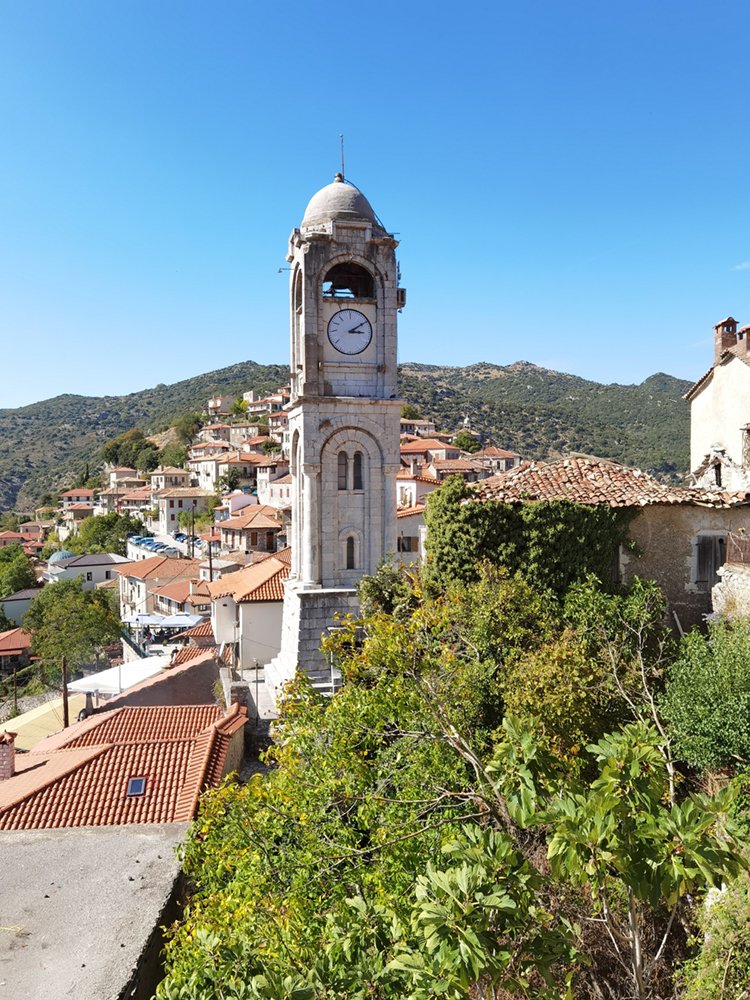 The clock tower of Dimitsana 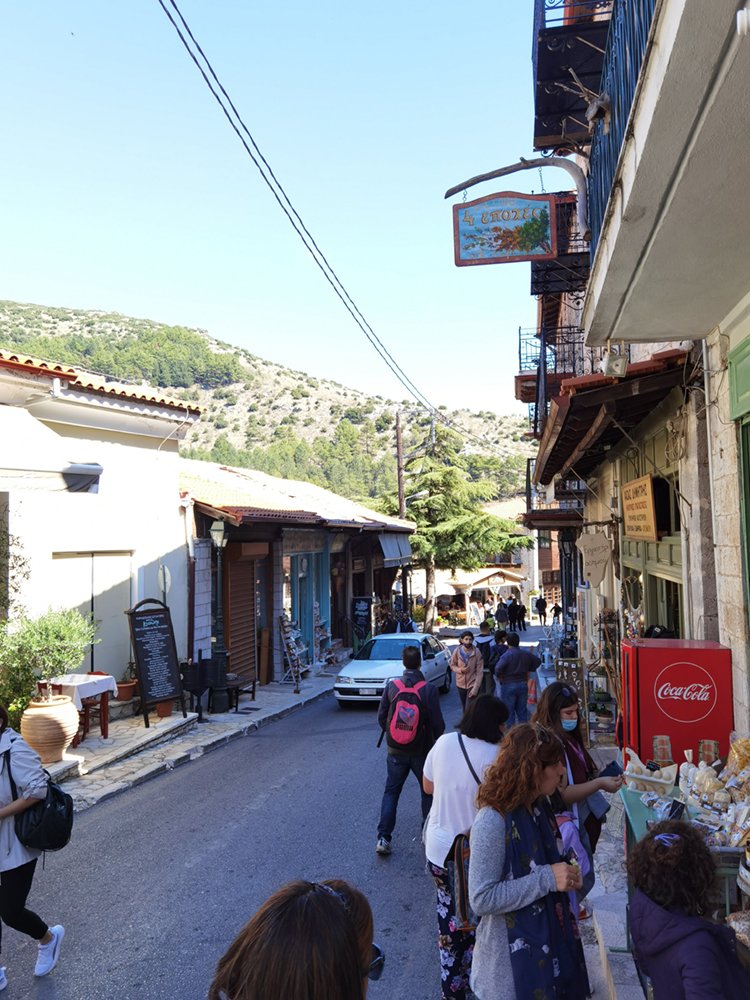 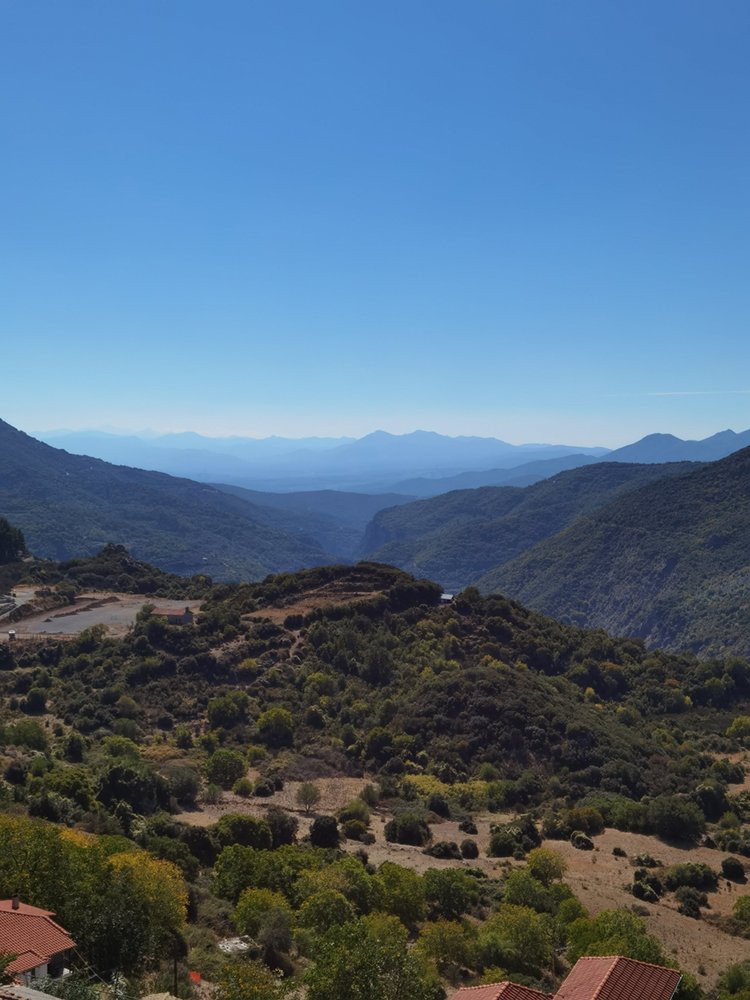