Greece is a country of southeast Europe with a wide variety of geographical features and a unique contrast of sea and mountains.

The mountains make up 80% of the country and penetrate into the sea forming peninsulas, gulfs, bays, coves, islets and chains of islands. There are large islands such as Crete and Rhodes and groups of small islands such as Cyclades and Dodecanese.

Greece comprises some thousands of islands and only about 166 are inhabited.

The country is washed to the east by the Aegean sea, to the west by the Ionian sea and to the south by the Mediterranean sea. To the north, the country borders the balkan countries. The coastline is one of the longest in the world measuring 13,676 km.

Less known are the mountainous areas and the features of the mainland. Pindos is the longest mountain range with a maximum elevation of 2,637 m and Olympus is the highest mountain with an altitude of 2,917 m. 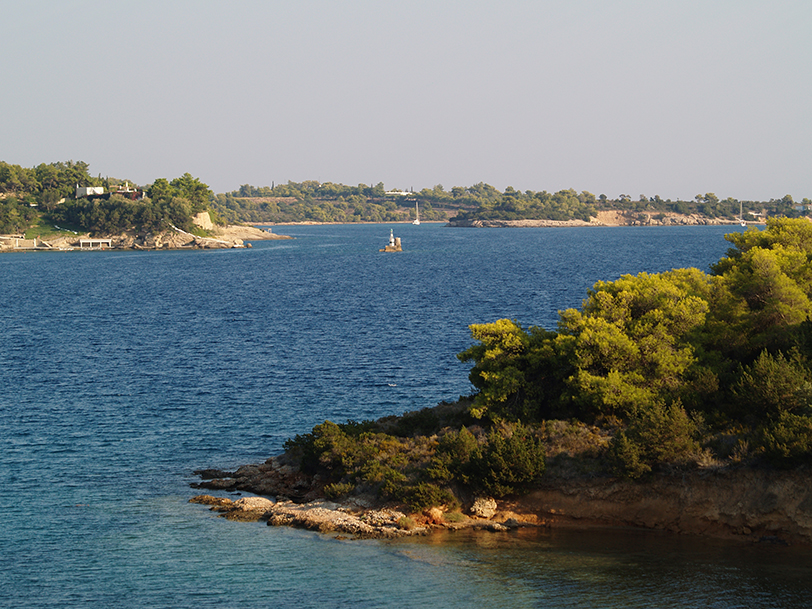 The climate is mediterranean with hot, sunny summers and mild, wet winters. However, it varies considerably due to the geography of the country.

In the Aegean, temperatures are cooler. Meltemi blows in the summer relieving from the hot temperatures, but sometimes it becomes very intense. In the Cyclades, the climate is more arid than the rest of Greece.

To the north, the climate is more continental, with colder winters, snowfall and more rainfall.

In Western Greece and Ionian, temperatures are cooler with more rainfall.

In the mountainous areas of Pindus, Rhodope, Olympus, Arcadia and Crete, the climate is alpine with harsh winters and cool summers. 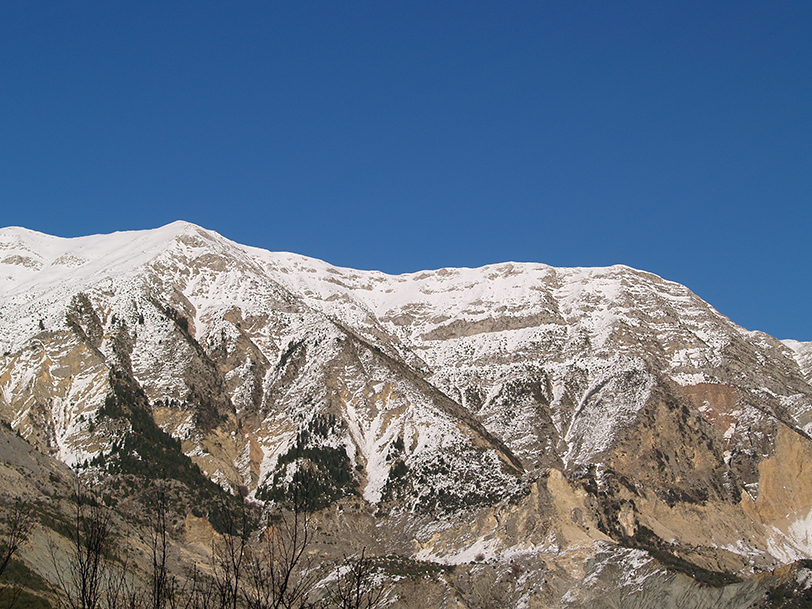 Greece is a member state of the Schengen area. Citizens of the EU, Iceland, Norway, and Switzerland can freely enter with a valid ID or passport.

A visa is not required for the nationals of the following countries, if they intend to stay less than 90 days: Australia, Brazil, Canada, Israel, Japan, New Zealand, Singapore, South Korea, UAE, USA and more.

Citizens of other countries must apply for a visa to the greek embassies or consulates.

The currency of Greece, as a member state of the Eurozone, is the euro. The drachma is no longer in use.

Debit and credit cards are widely used in all transactions. The cards Visa, Master Card, American Express and Diners Club are accepted. It is recommended to have some cash with you in case the POS machine is offline or out of order.

Kiosks (periptero) are excluded from the use of cards.

If you travel to remote areas or islands, it is wise to have some cash. ATMs can run out of money, so don't wait until late to withdraw.

Euro withdrawals from ATMs are charged. The fee depends on the bank.

On arrival or departure, you have to declare cash more than 10,000 euros to the Customs Office.

Visitors from EU countries, Norway and Iceland, can use their mobile phone for calls and text messages as if they were in their countries with no extra charge.

For non-EU visitors, extra charges apply for calls, text messages and data. If you don't want to use roaming, turn it off from the settings menu.

Public card phones with prepaid cards were once the cheapest and easiest way to call home. With the widespread use of mobile phones they ceased to exist.

WiFi is widespread in greek cities and villages. You'll find in all restaurants, taverns, fast foods, cafes, malls and hotels.

If you need access to a desktop computer, look for an internet cafe in any tourist town.

With prepaid SIM cards you buy talk time and data. It's the best solution for non-EU visitors. The major mobile operators are Cosmote, Vodafone and Wind with shops in all cities. You can also visit Germanos techstores to buy a package of Cosmote.

Be aware that you must have your id card to activate a SIM card.

In the cities you may find street vendors of Vodafone.

Citizens of the EU, Iceland, Norway and Switzerland

Before you travel, apply for the European Health Insurance Card (EHIC) from your national health service provider. It's free and grants access to the national healthcare system as if you were in your country. Depending on the incident, charges may apply. It doesn't cover private healthcare.

The healthcare system in Greece in simple words

The national healthcare system comprises hospitals, healthcare centers in towns and regional medical offices in remote areas and small islands. The last two cannot deal with serious incidents. In the event of a serious incident the patient gets first aid and is transported to a hospital. It is noted that transport is easier on the mainland than on an island.

After 14:30 the hospital must be on duty to accept patients.

In cities and towns you'll find private doctors but not in remote areas and small islands.

Pharmacies can help you with incidents such as sunburns, mosquito bites, allergies and sicknesses. The staff in the tourist areas speaks english and you'll have no problem to communicate.

Business hours of pharmacies are like all other shops in the area.

For out of hours you must seek the pharmacy on duty. The pharmacies on duty are displayed at the entrance of every pharmacy, however, usually it's written only in greek. If you have internet connection available type "vrisko pharmacy duties Santorini" to find it in english.

Smoking is prohibited to all public spaces, cafes, restaurants, taverns and night clubs.

You have to be cautious when swimming in the sea.

If strong winds prevail, ask your hotel if the beach you are about to visit is safe. If not, ask for a safe beach.

Exposure to the sun

Sunshine in Greece can cause you sunburns, dizziness and sunstrokes. Follow the guidelines below for your safety:

We have a heatwave when the temperature rises above 40° C. The heat is excessive and lasts for days. Children and the elderly are particularly vulnerable to these conditions.

What to do when a heatwave hits:

Fires are a usual phenomenon during the summer. They start when the wind blows strong and spread so fast they can reach a man running.

If you see a fire, even if it's not heading towards you, be cautious. If the wind changes direction it can move towards you.

If the wind is blowing towards you and there are no obstacles, it is 100% sure it will reach you.

If danger is imminent move to a safe spot.

EU citizens can drive in Greece with their country's license. Non-EU citizens need to have an IDP (International Driving Permit) along with their valid driving license.

Greece has an adequate system of motorways, many are newly built: Tripoli - Kalamata, Tripoli - Sparta, Ionia Odos, Egnatia Odos, Corinth - Patra and Attiki Odos. The jewels are Rio-Antirrio bridge and the bridges of Egnatia Odos. Traveling in mainland Greece has never been easier and safer.

You can pay the tolls in cash or by credit/debit cards. There are also coin slots available and alternatively you can get an e-pass.

The speed limit in residential areas is 50 km/h, in motorways 130 km/h and outside of cities 90 km/h, unless signs state otherwise. Seat belts are mandatory, driving in flip flops and talking on mobile phone is prohibited.

Downtown Athens traffic jam is usual. Nevertheless, there's no need for a tourist to drive a car while downtown, you can use the public transport: metro, urban buses and tram.

When greeks leave or return massively to Athens, motorways are jammed. This happens on Easter, Whit Monday, 15th of August and the weekends from late July to late August. Also on March 25th and October 28th if they fall on a weekend or a three-day weekend.

In Greece operate about 35 airports, most of them being on islands.

The domestic airlines are:

The largest and busiest airport in Greece. It provides access to Athens and all the major transport hubs: ports, railways, intercity buses and motorways.

It's a modern and high standard airport with facilities that make the wait enjoyable.

It's the gate to northern Greece. It accepts domestic and european flights, it's 18 km from the city center and the access is by bus and taxi (see here for fares).

The largest airport in Crete. It accepts domestic and european flights, it's 4 km from the city center and the access is by bus and taxi.

It accepts domestic and european flights. It's 15 km from the city center and the access is by bus and taxi.

It accepts domestic and european flights. It's 1 km from the city center and the access is by bus and taxi.

Intercity buses (KTEL in greek) are a very popular mean of transport for the greeks. They travel from Athens to every town and from there to every village.

It's the cheapest way to travel, but on curvy and narrow roads, buses become really slow. For your convenience, stick to this simple rule: follow the motorways. You can travel easily where the motorway goes: to Nafplio, Kalamata, Sparta, Gytheio, Patra, Volos, Larissa, Thessaloniki, Kavala, Arta, Ioannina and other destinations.

You can also travel to all the nearby islands: Spetses, Hydra, Poros, Zakynthos, Corfu, Kefalonia, Lefkada, Skiathos, Skopelos and Alonissos.

The buses are comfortable and air-conditioned. The music is driver's choice, usually greek folk music.

KTEL are private companies, one on each prefecture and island. It's not a single organization, therefore, there is no search engine to search for routes like in ferries or airplanes. Instead, you have to search on timetables on different websites.

In Athens there are two KTEL stations: Kifissos and Liosion. The access is by bus lines.

Go to the ticket booth and then to your bus. Some KTEL websites provide an e-ticket, you need to print it. After boarding hold the clip for the inspector.

KTEL are not perfectly made for tourists. Some websites are only in greek and the drivers don't speak english at all. Things are better on the islands.

Before everything, you need to know that railways in Greece have been built in the 19th century and only a part has been modernized. Train travels to the less touristy areas of Greece and stops to almost every village on the way.

The trips are subject to train connections, so duration can significantly increase.

It serves mainly central and northern Greece. Routes to Peloponnese have been abolished.

What are the reasons for a tourist to use the greek railways:

There are also scenic routes for tourists:

Piraeus Station is located at the port. Athens station is called "stathmos Larissis" and you can access it with metro line 2 (red).

The Suburban Railway connects Athens Airport with Athens and Piraeus port with frequent routes. It's also connected to the railway network and all metro lines.

From Kiato you can reach Patra by bus with the same ticket.

Tram connects Athens city center with the beachfront suburbs. The line extends from Peace and Friendship Stadium (S.E.F.) to the suburb of Voula.

It's good to be informed for a possible strike.

The metro is the fastest and most reliable way to get around Athens.

Line 1 has been operating since the 19th century, while 2 and 3 since 2000. It counts 61 stations. For fares check the official website.

Thissio and the Acropolis stations are connected between them by the pedestrian street of Dionysios Areopagitis, Athens' most picturesque promenade.

In Monastiraki station you'll see the excavations uncovered for the construction of the station. Also at Panepistimio, Akropoli, Syntagma and Evangelismos, the findings are on display.

You can easily go to:

It's connected to the Tram at Syggrou-Fix and Neos Kosmos stations, the Suburban Railway (Proastiakos) at Neratziotissa and Doukissis Plakentias stations and the Railway network at stathmos Larissis.

It's good to be informed for a possible strike.

If Athens Metro is on strike, the best way to get around Athens is on foot