How to travel by ferry: a complete guide

Traveling by ferry to the greek islands

The best way to travel to the greek islands is by ferry. Routes are many and you can travel daily to any island you like or do island hopping.

In fact, only by ferry you'll feel you are going to an island, something you won't understand by plane. You'll see immense seascapes, wonderful views of the islands, sunsets and you'll feel the sea breeze. All these will make you feel part of the greek island world. 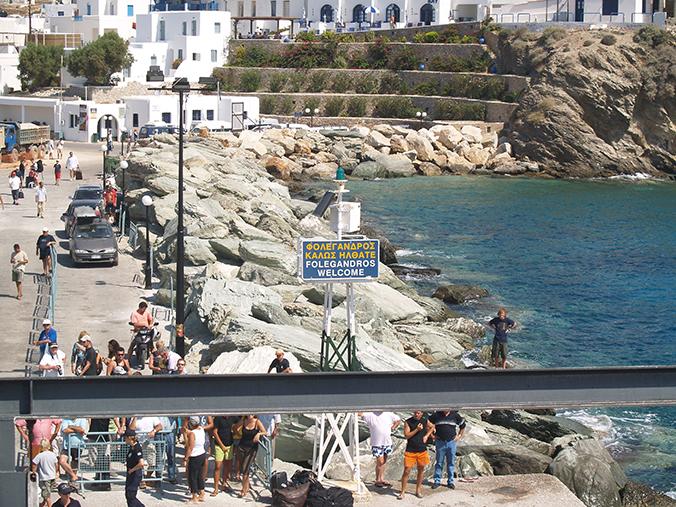 Arriving to a greek island port

Routes to the greek islands

Ferries departing from the country's main ports receive the largest passenger volume. They serve high demand routes which include the largest and most popular islands.

Ferry companies serving these routes are:

Once you reach your destination, you'll notice that other regional or local routes give you more options options. The routes are shorter and serve even the smallest islands.

Ferry boats serve very short lines, usually a few minutes distance. They connect two neighboring islands or the mainland with the opposite island. Some routes are:

Most of these routes are not available in search engines, search for information on our web pages. 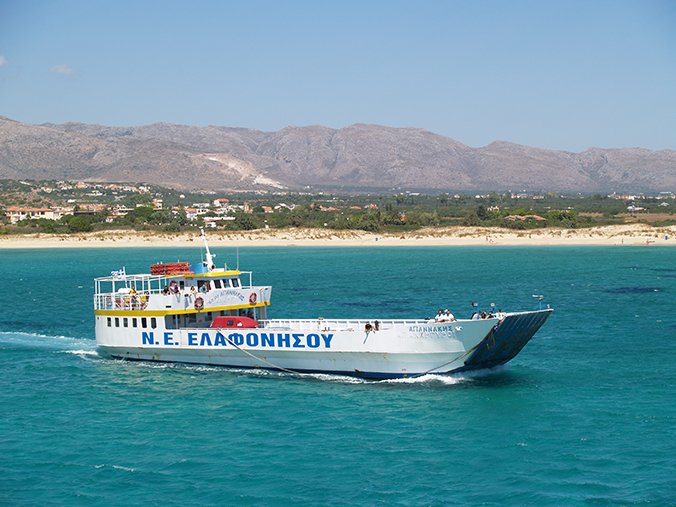 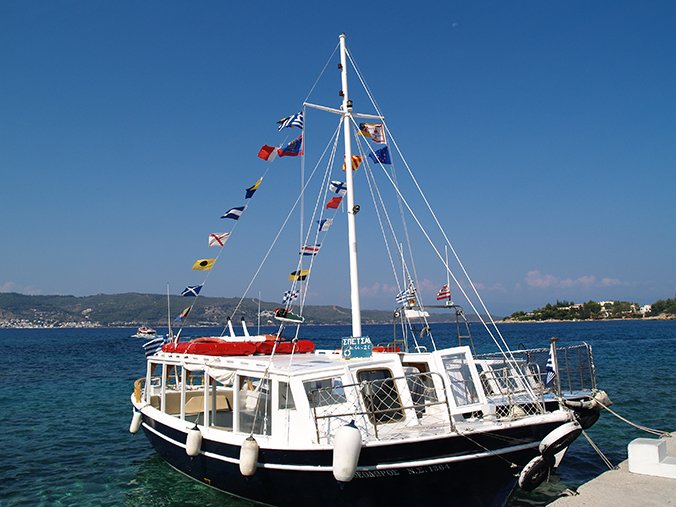 When ferry boat routes are not enough in summer, the route Costa - Spetses is operated by kaiki too

The excursion boats you'll see on many destinations, add more routes to your choices. They take daily cruises and you can use them for island hopping. Besides, you can visit islands that are not visited by any other boat, such as Polyaigos.

You won't find these routes in search engines, search for information on our web pages. 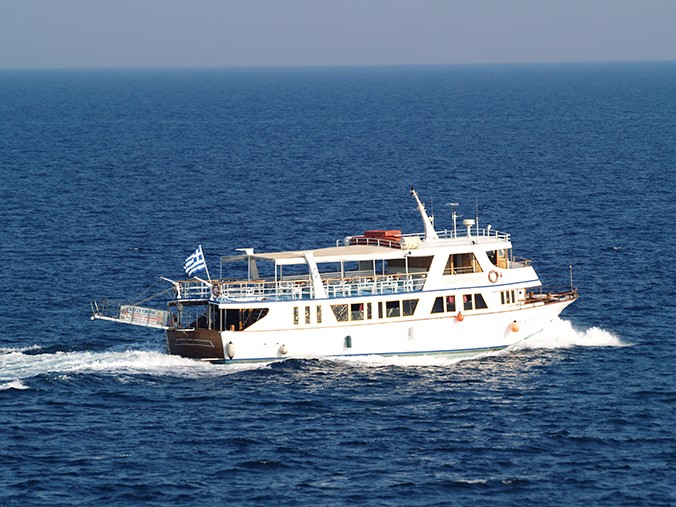 Excursion boat going from Porto Heli to Hydra and Spetses

5. Routes in the Ionian Sea

You can get from the ports of Kyllini, Patra, Astakos and Igoumenitsa. Lefkada is connected to the mainland by road.

The connections between the islands are Lefkada (Nidri) - Meganisi and Kefalonia (Sami) - Ithaca (Pisaetos).

The companies operating are:

Crete is the largest Aegean island and the easiest to reach all year round.

You can get from Piraeus, Cyclades, Kythira and Dodecanese.

The cretan ports are Heraklion, Chania, Kissamos, Rethymnon and Sitia.

7. Routes to Turkey, Italy and Albania

Routes to Turkey are one-day excursions to highly popular destinations. Specifically they start from Kos, Rhodes, Chios, Mytilene and Samos for the turkish cities of Ayvalik, Kusadasi, Marmaris, Bodrum, Cesme and Fethiye.

For Italy, the operators are Super Fast Ferries and Minoan Lines. Routes depart from Patra and Igoumenitsa.

For Albania, you can go in high season from Kerkyra to Agioi Saranta and Himara, with Ionian Seaways and Marina Maritime.

The search engine vrisko.gr displays all routes from any port for the date you'll choose. If you like island hopping, you have to conduct thorough research.

We recommend you to search whether your destination is a "Departure Port", to find islands to hop. Also search on our web pages for possible ferry boats, sea excursions, etc. Note that these apply for the mainland too. 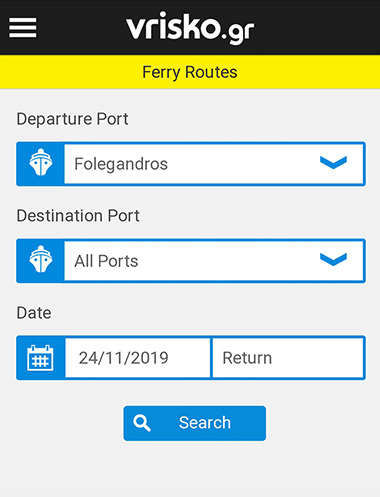 Find all routes from Folegandros for a specific date 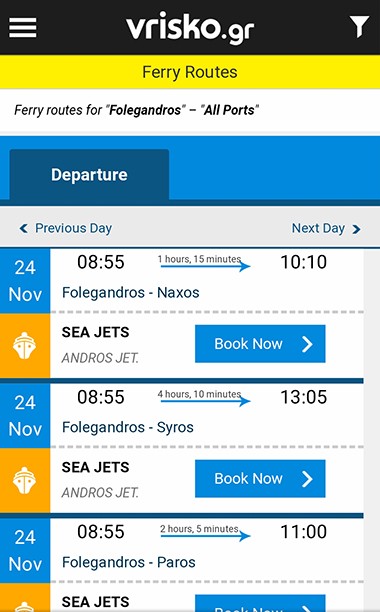 All routes from Folegandros for the selected date

When Athens Metro goes on strike, it's likely that routes from Piraeus will be modified

The islands of the barren line are, as the name implies, barren. They are small and mountainous, with few inhabitants, usually without a trace of vegetation.

The lines have little passenger traffic and are carried out with a state subsidy to serve residents. Many stops and long travel times characterize these routes.

Other islands of the barren line are Oinousses, Psara, Fournoi, Agios Efstratios, Antikythera and Gavdos.

The islands most difficult to reach are Kasos, Karpathos and Kastellorizo.

Island hopping is one of the most exciting things to do in Greece. Every port and a destination could be said in short, but you need to plan your trip in advance.

Before everything, you need to know two things:

The rule of thumb is to follow the lines.

For example, you should not expect to hop from Milos to Mykonos or Amorgos. There is no such route. Instead, you should go to Syros and then Mykonos, or to Naxos/Santorini and then Amorgos.

You can't hop from Saronic or Sporades to any other island group.

F/B Prevelis is the only ferry traveling to Cyclades, Crete and Dodecanese. The route is Piraeus - Milos - Santorini - Anafi - Heraklion - Sitia - Kasos - Karpathos - Halki - Rhodes and takes more than 30 hours.

The Cyclades are, as the name implies, a circle.

The routes start from Piraeus, Rafina and Lavrio and cross the Cyclades to various directions. The intracycladic route operators are:

The hubs are Syros, Naxos and Paros. Minor hub is Santorini. In general, a multitude of routes characterizes the Cyclades.

The Dodecanese are small islands (except for Kos and Rhodes), lined up and close to each other. Get on the ferry and get off to the next port, it can't be simpler than that, you don't have to organize much.

Furthermore, you can get the excursion boats from Kos and Patmos

Hubs are Kos and Rhodes.

Easy island hopping near the continental coast and Piraeus. It comprises the islands Aegina, Agistri, Poros, Hydra and Spetses. The lines serve also destinations in the Peloponnese: Methana, Ermioni and Porto Heli.

No special planning is needed, the islands are lined up, and the routes are plenty.

Easy island hopping to the islands of Skiathos, Skopelos and Alonissos, from Volos, Agios Konstantinos and Mantoudi in Evia.

From Vathi and Karlovassi you can go to Ikaria, Fourni, the central islands of the Cyclades and the northeast Aegean islands (Chios, Mytilene, Limnos, Agios Efstratios). From Vathi you can visit Kusadasi.

Also from Pythagorio, you can visit the Dodecanese up to Kalymnos.

How to book ferry tickets

You can book tickets online, on a tourist agency or the ticket booths at the ports.

You can also book to the ferry company's website (where available).

You'll need either to print the ticket or to do web check-in and print the boarding pass. In any case, you can pick it up from a tourist agency or a ticket booth.

Only in a few companies is possible to display the e-ticket from your smartphone and board on. You must review the terms of use.

Tickets are by no means purchased on board.

Some companies offer discounts on round-trip tickets. Children and infants are entitled to discounts. For cancellations, changes, conversion to open ticket and loss, contact the company or the travel agency. Terms and conditions apply.

Should I book early?

In general no, ferries are gigantic. Just have in mind some religious holidays and when the greeks get their leaves massively.

Passengers and vehicles board from different entrances. The passengers display the ticket and place the luggage in the luggage storage area.

The passengers must first get out of the car. The driver displays the ticket and enters in reverse, the boat workers will instruct you on how to enter and park.

If you have a vehicle take care you don't board last minute.

Keep the boarding pass for a possible check.

For disembarking, don't expect to hear the loudspeaker announcing arrival at the port. You have to get your luggage from the storage area and get into your car on time.

There are four types of ferries: conventional, catamaran, high-speed ferry and flying dolphin.

The types of seats are:

All interiors are air-conditioned.

It's the classic type of ferry, with big lounges and big open decks to enjoy the sea. 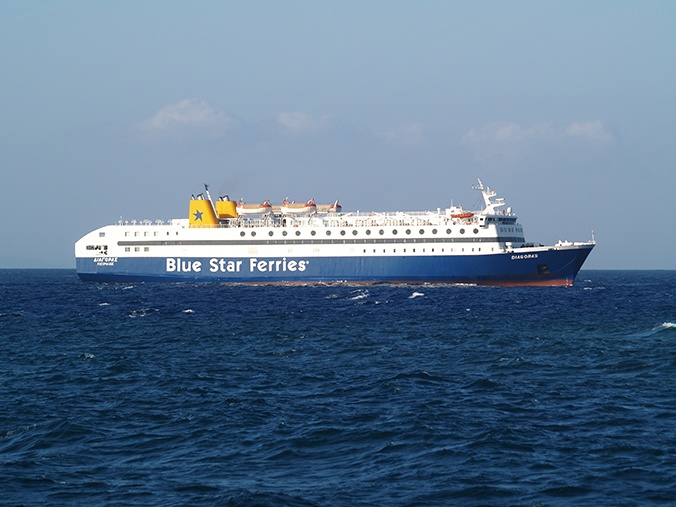 These large vessels operate the long-distance lines of Cyclades, Dodecanese, N/E Aegean and Crete. They have a big capacity of passengers and vehicles

It's the ideal choice if you get seasick. Due to its size, the sea has to become particularly rough to bounce around.

The cabin types are:

Modern ferries have better cabins than older ones.

The fastest way to make your trip. You can easily distinguish it from the double hull. Not all catamarans carry vehicles and it has no open decks. 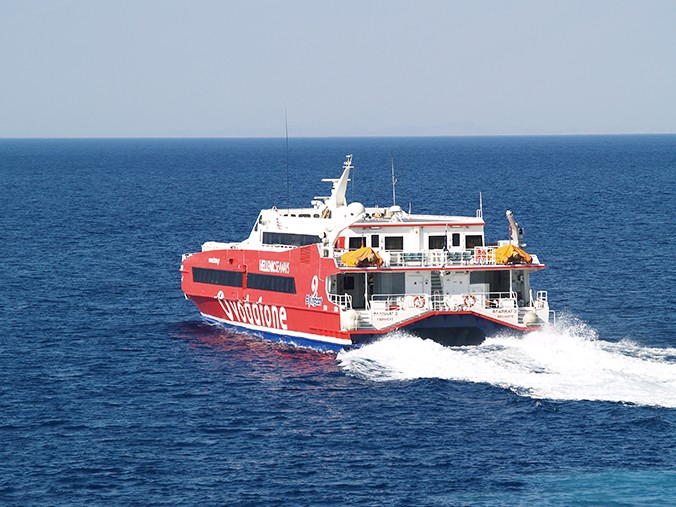 It resembles a small conventional ferry with an aerodynamic shape. It's faster than conventional and slower than catamaran. It has no open decks.

The smallest type of ferry. It is elongated and when it reaches speed, it rises from the sea and goes even faster. It has only numbered seats.

It operates short routes in Saronic, Dodecanese and Sporades. It doesn't have snack bar or restaurant. 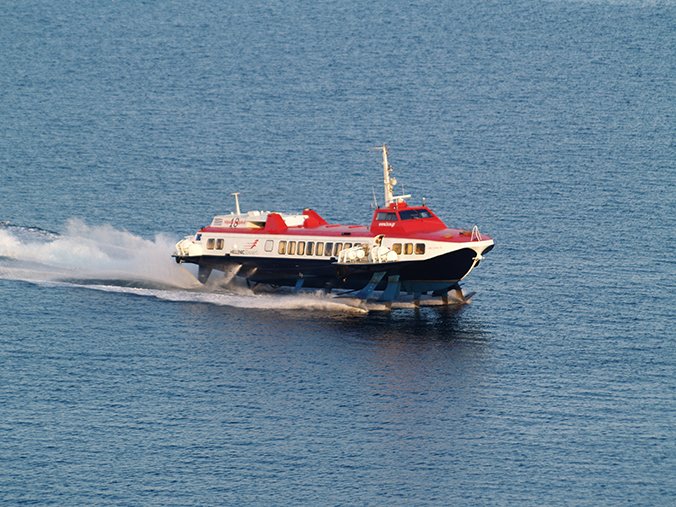 A flying dolphin at full speed

It's the largest port in Greece and one of the largest in Europe, so you need to know some things to find your way easier. 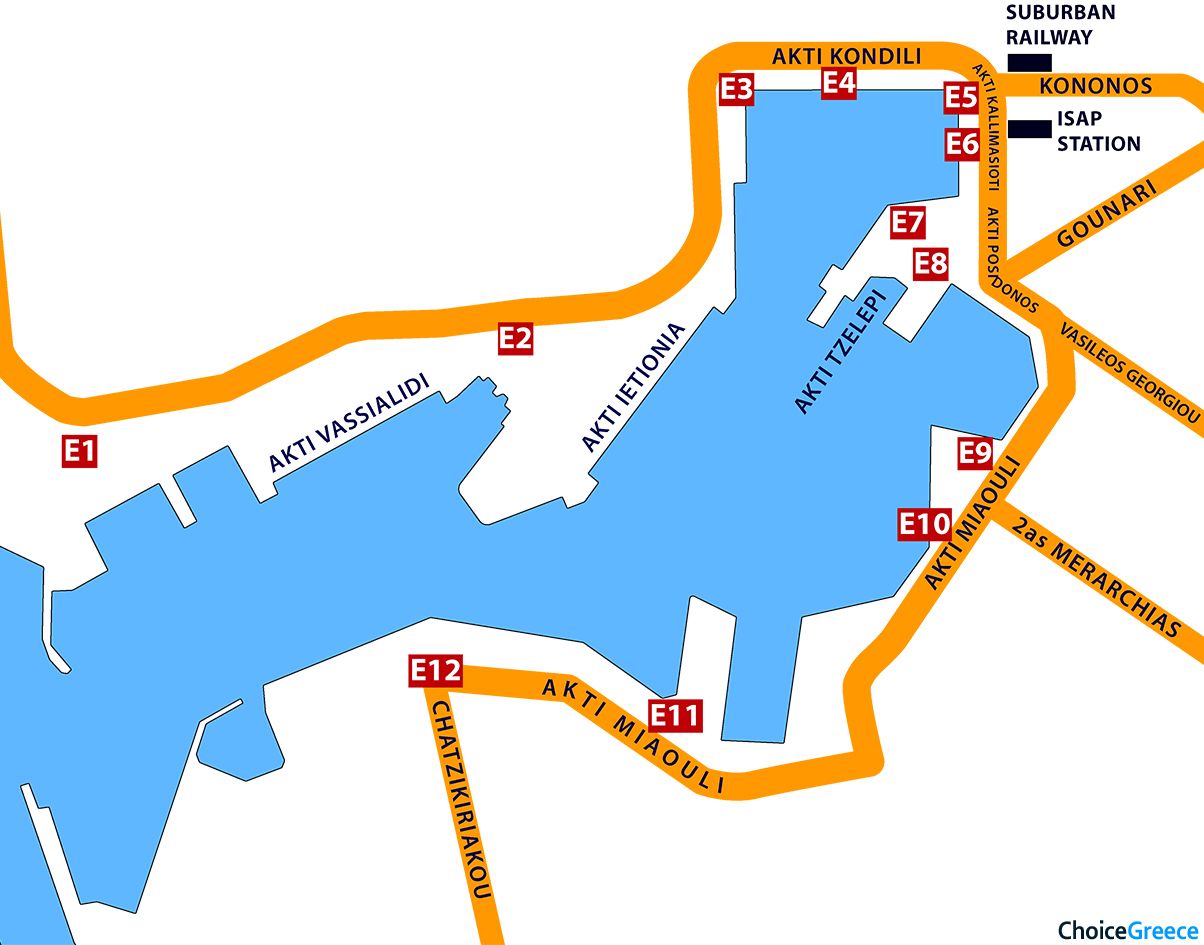 The port is organized in gates:

Ferry companies have ticket booths at their departure gates. You can buy a ticket or print the e-ticket.

You can get to the port by:

Within the port, you can get from gate E5 to E1 with a free shuttle bus. The stops are:

Bus line 859 is roundabout outside the port and passes through the ISAP and Suburban Railway stations. It enters the port only on the E2 gate.

There are also taxi ranks within the port.

Finally, call 14541 for information about routes.

Rafina port isn't connected to the Metro and the Suburban Railway. You can reach there by intercity bus (KTEL), taxi or your vehicle.

Taxi fare is regulated by the law:

The nearest metro and suburban railway (Proastiakos) station is Pallini.

Taxi fare is regulated by the law: