A complete guide for the Athens Metro 2023 - Map 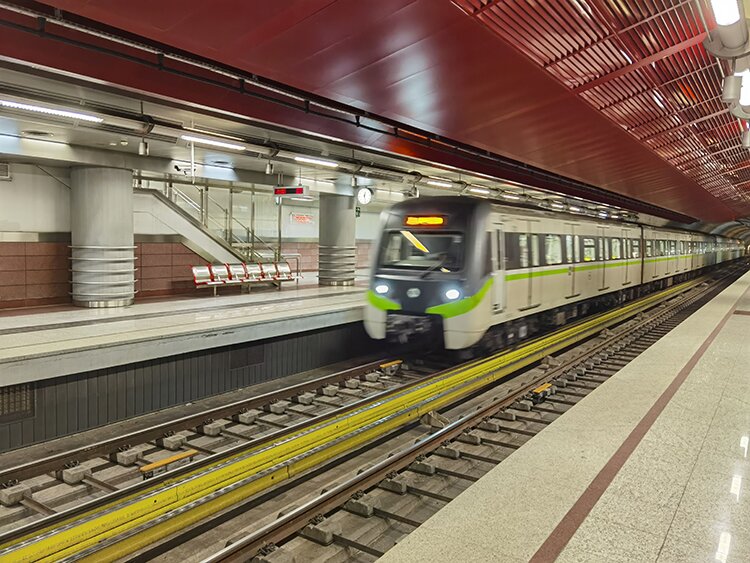 Metro station while a latest generation train is passing by

The Metro has become synonymous with fast transportation in Athens and the suburbs. Since 2000, when it started its operation, it has changed the transport map drastically reducing the travel time which until then was intertwined with traffic jams and inconvenience.

At the end of the article I have collected photos of the stations for you to know more.

It consists of three lines:

Below is the Metro map:

The lines cross the city from one end to the other, passing through Athens city center where they cross each other. As you can see the Metro does not serve all of Athens but a part of it. In order to reach your destination you may need to use another means such as city bus or taxi. Several buses pass outside the Metro stations and there are usually taxi ranks.

Line 1 colloquially is called "Ilektrikos" and is also known with its old name as ISAP. It has been operating since 1869 and connects Piraeus with Athens and Kifisia. It is mainly on the surface, only the stations in the center of Athens are underground. Compared to the past the ISAP stations have been upgraded in order to come as close as possible to Metro standards. As you understand it passes through the old and degraded suburbs of Athens. Several beggars also enter this line so be prepared.

The Metro are lines 2 and 3 that were built in 2000 according to modern needs. The stations are entirely underground. Usually when we say Metro we refer to all 3 lines.

Beware of pickpockets during your transportation on the Metro, especially in the stations in Athens center. The bags must be held strictly in front of the chest and grasped with your hand.

The Metro operates from 5:00 in the morning until midnight. On weekends for lines 2 and 3 the working hours are extended beyond midnight. For more information check the official website.

The most important stations for each line are: 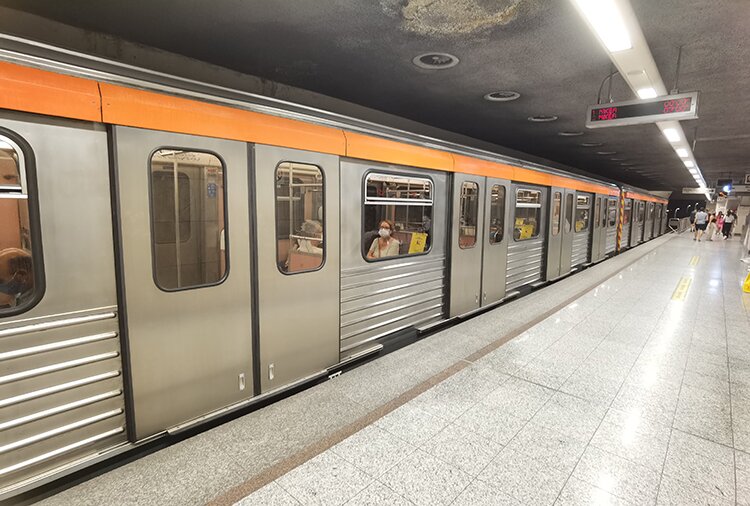 At every station you go down the escalators, the exception to this rule are ISAP surface stations. You buy the ticket from the vending machines, during working hours there is a cash desk for the purchase too. Then you validate it on the ticket validation machines. Follow the signs to reach your platform. Go down escalators again. While waiting for the train make sure not to get too close to the gap with the rails because it is forbidden, there is a red line that if you cross it a warning will be heard from the loudspeakers. The Metro trains are fast, they reach the next station within 2 minutes. It takes a little more than 20 minutes to go through 10 stations.

After disembarking follow the signs that write "Exit" to exit the station. The signs also indicate the streets on the surface that they exit. To transfer to another line, follow the signs with the color code and choose the direction.

The stations on line 1 compared to 2 and 3 are quite different. First of all they are old. Secondly, the trains are slow, they make the Piraeus - Kifisia route in 1 hour. Special attention to the gap between the train and the platform where a small child's foot can fall in, is something that can also be heard from the loudspeakers.

It is useful at stations where two lines cross to pay attention to the color code of the line, green for 1, red for 2 and blue for 3. Then pay attention to the "To" signs to find the direction to follow. Navigating single line stations is easy but where two cross can be confusing so take your time, those unfamiliar and in a hurry may lose their way. Even me who I am familiar I always look at the signs where to go.

The stations have elevators. There are also boards on the platforms that inform you at what time the next train is going to pass. 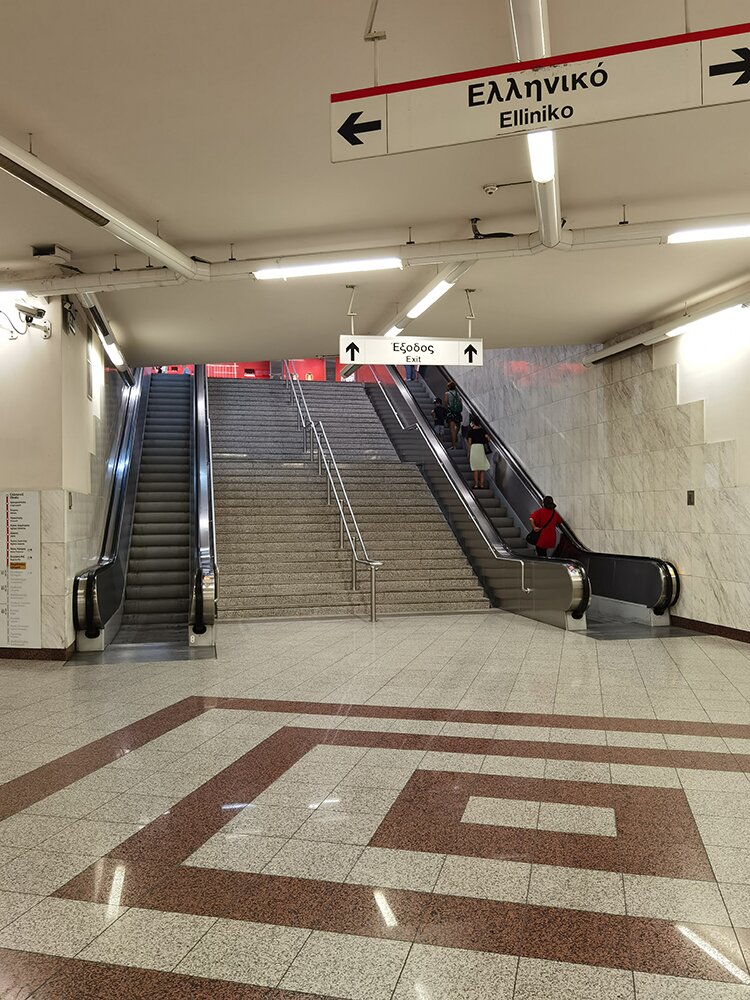 Pay close attention to the signs to navigate the stations. Emphasize color coding. Green for line 1, red for line 2 and blue for line 3. On the left is the sign that will help you, if you do not know, towards which direction to take the Metro. You will find a photo of this sign at the last section of the article

The tickets serve both permanent residents and tourists or those with specific needs. For regular use of the Metro the rechargeable Athena Card is recommended. They are charged at the stations at the vending machines or via the Internet. For card details you must visit the official website athenacard.gr.

Ticket prices are (from the "Buy Travel Product" menu at the vending machines):

The Athens Area ticket is used on Metro, Tram and city buses. What locals usually use is the 90 minutes one. You can use it as many times as you need, as long as you validate it on all means you enter within that 90 minute period. It is still valid until you disembark even if the 90 minutes have passed. "Trips" refer to ticket packages that you buy at better prices.

The options "Card Info" and "Top Up" are for Athena Card. Insert the card into the slot and follow the instructions. Vending machines accept coins, banknotes and bank cards. Foreign bank cards may not be accepted so it's better to have change. 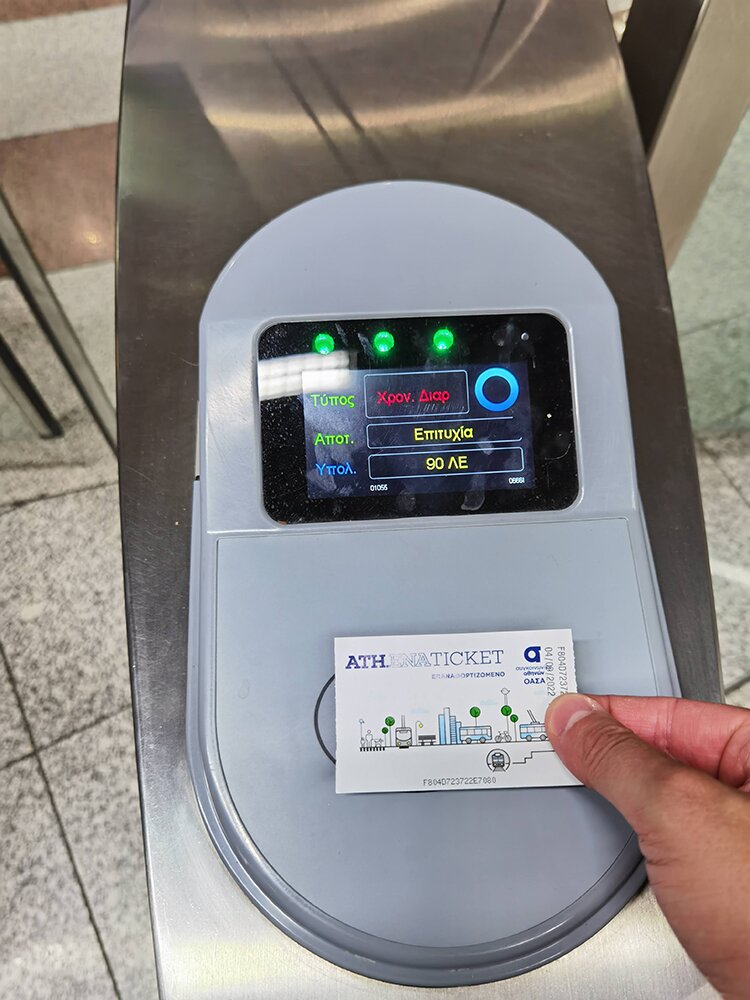 Ticket validation at the gate of entry. The indication "90 ΛΕ" means that there are 90 minutes left until the ticket expires. This is how it appears on the first validation, on subsequent ones it will show less minutes

Connection with Tram and Suburban Railway (for beach and Airport)

The Metro does not go to the beach. It connects with the Tram at line 2 stations "Neos Kosmos", "Sygrou-Fix" and "Faliro" station of Line 1 so you can cross the entire beach front of Athens and reach Glyfada and Voula.

It also connects with the suburban railway at "Neratziotissa" and "Doukissis Plakentias" stations to access the Airport. Some Metro trains reach the Airport from the "Doukissis Plakentias" station, but using the Suburban railway lines. If you want you can read my article about how to get to Athens Airport Eleftherios Venizelos.

Is the Metro safe at night?

I have never felt in danger or unsafe in a Metro or ISAP station. ISAP's "Victoria" station had in the past acquired the reputation of being less safe, but not dangerous, because it is underground in a very run-down district of Athens.

The station that has been the most adventurous for me is "Irini" and this is because of the hordes of fans who, like me, went to watch football matches. After the end of the match, the anxiety for me was to go quickly to the station before the great mass of people went so that I could leave faster. 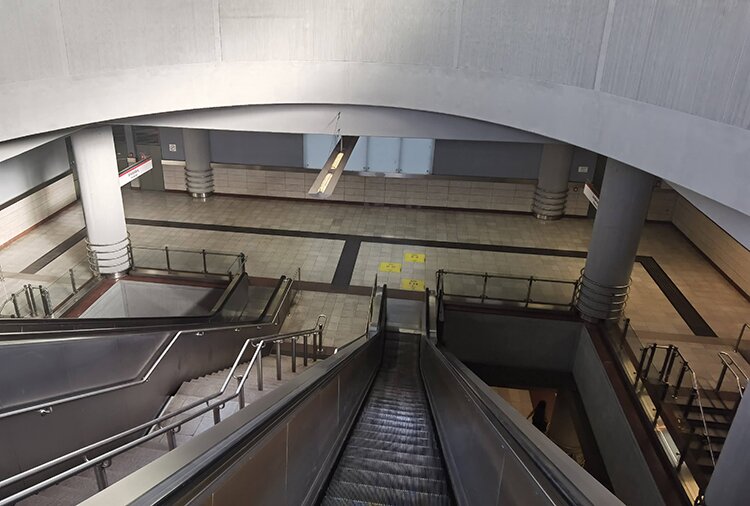 Entering a Metro station. The first thing you do is go down the escalators 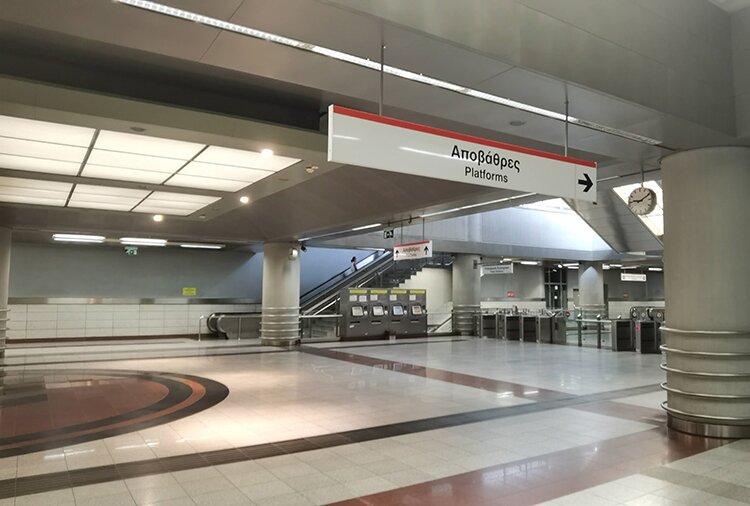 Follow the signs carefully. This sign shows the way to the platforms of the red line 2 Anthoupoli - Elliniko 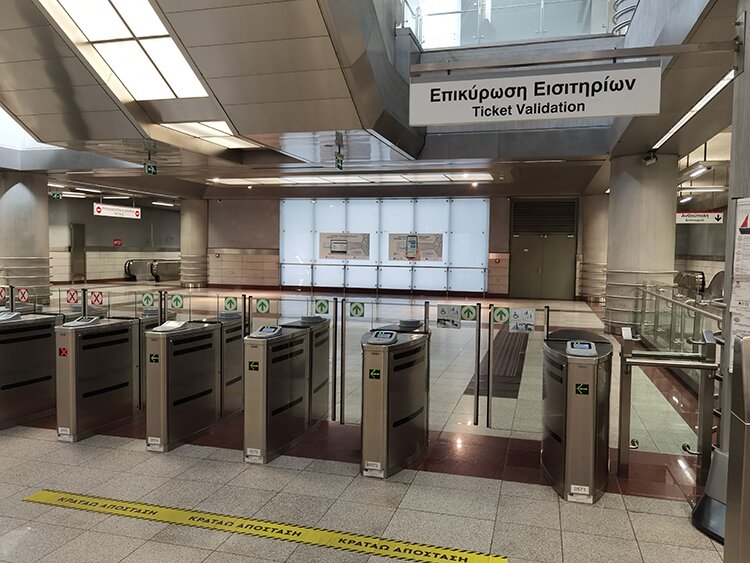 Tickets are validated at the entry gates 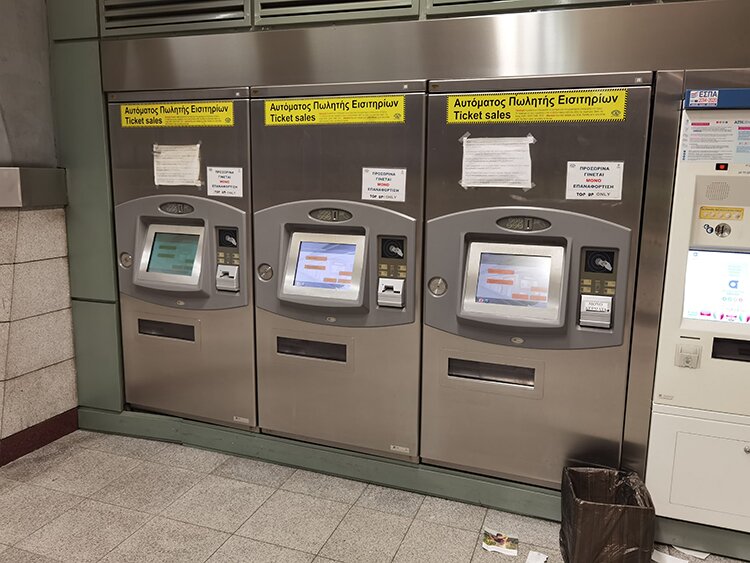 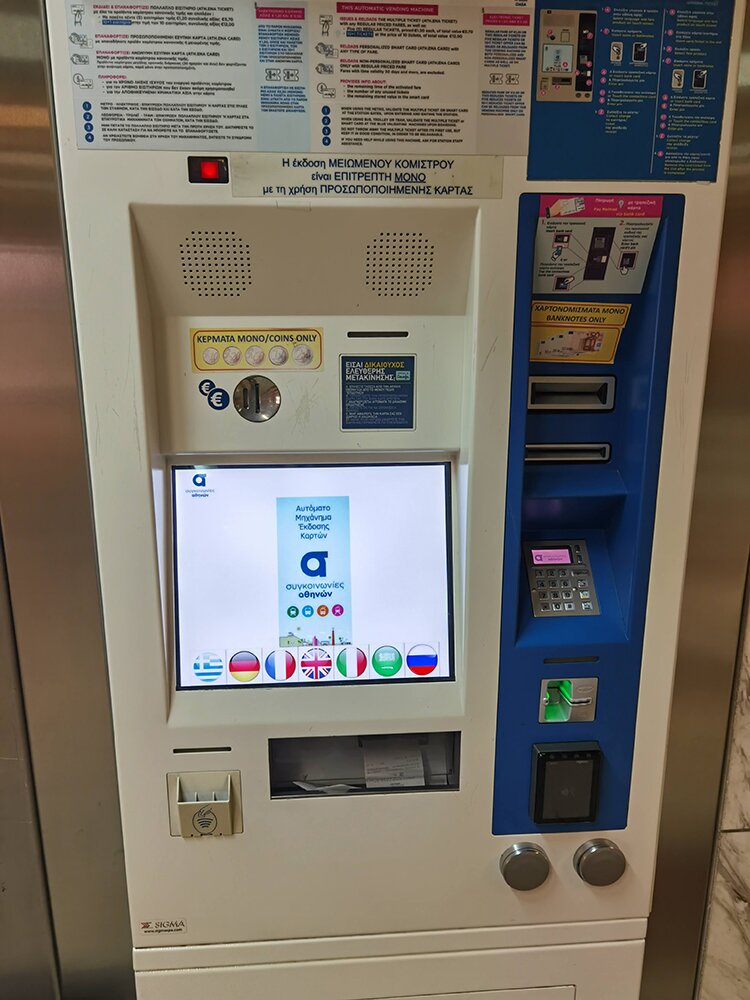 Another type of vending machine. On the screen you see the language selection menu. Above the screen on the left is the coin slot. On the bottom left is the slot where we put in the Athena Card, while on the right is where you get the ticket together with the receipt. In the blue frame above is the banknote slot and below with the green light is the slot where we put in the bank card. Above with the pink screen is the keyboard where we enter the PIN 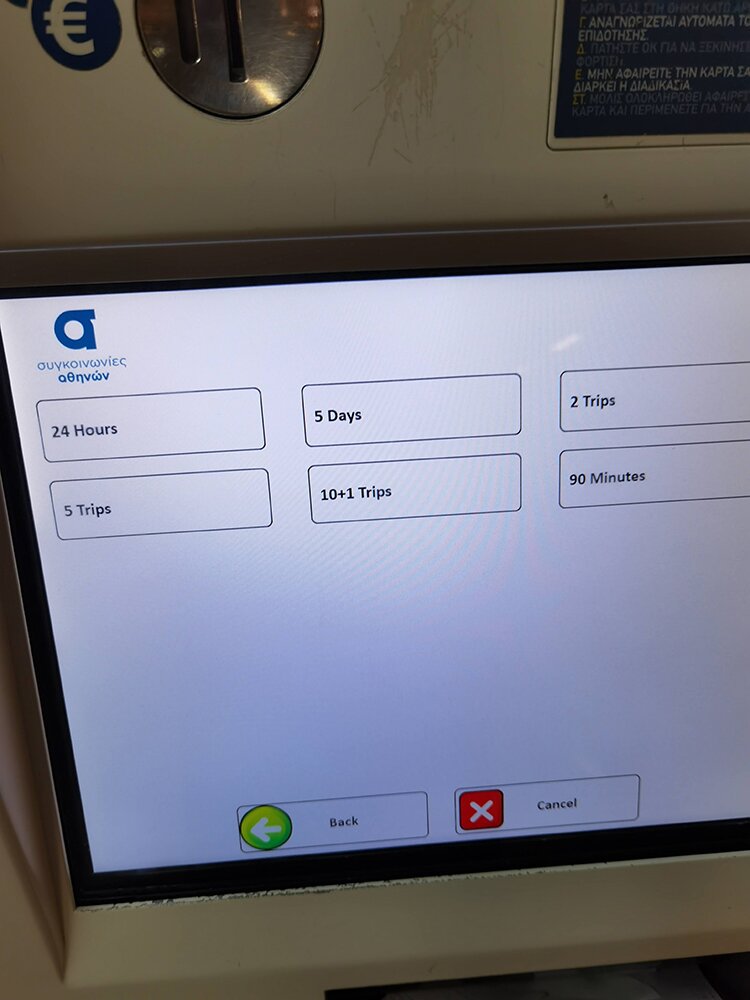 After you press "Buy Travel Product" the next screen is the ticket options. The most used ticket is the 90 minute ticket 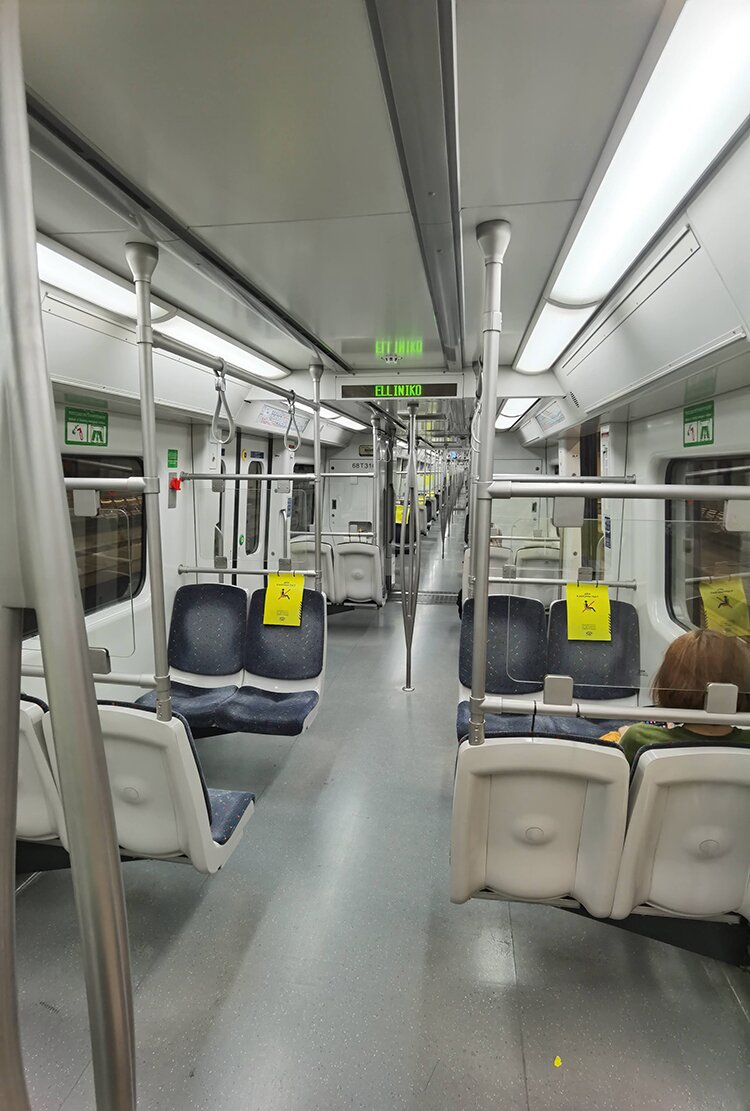 The interior of the trains of lines 2 and 3 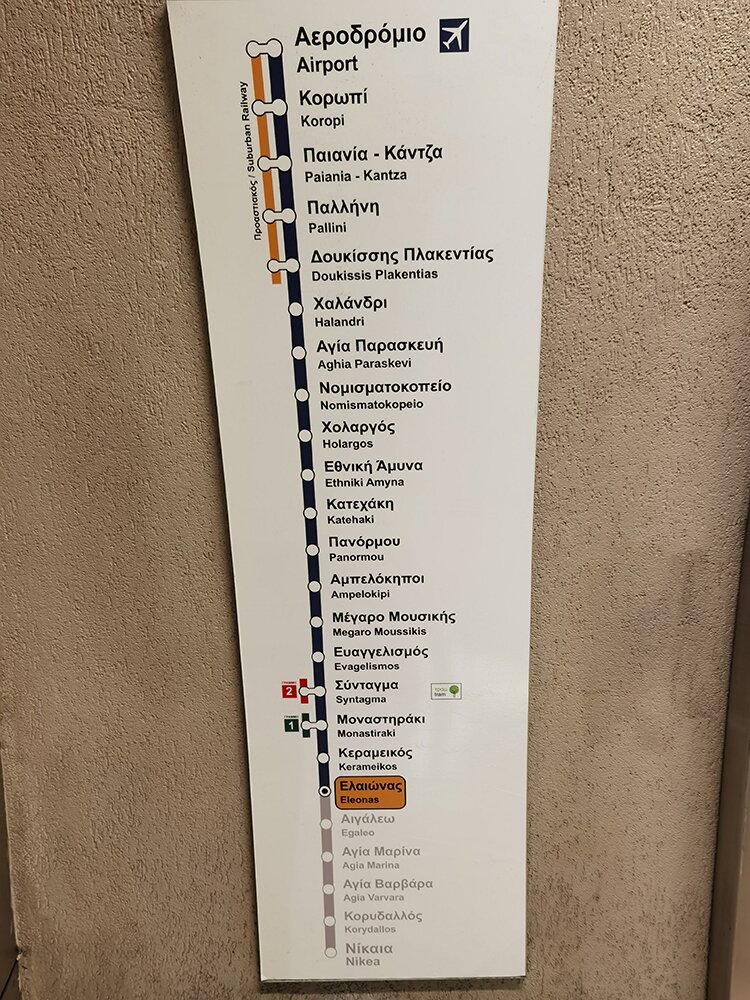 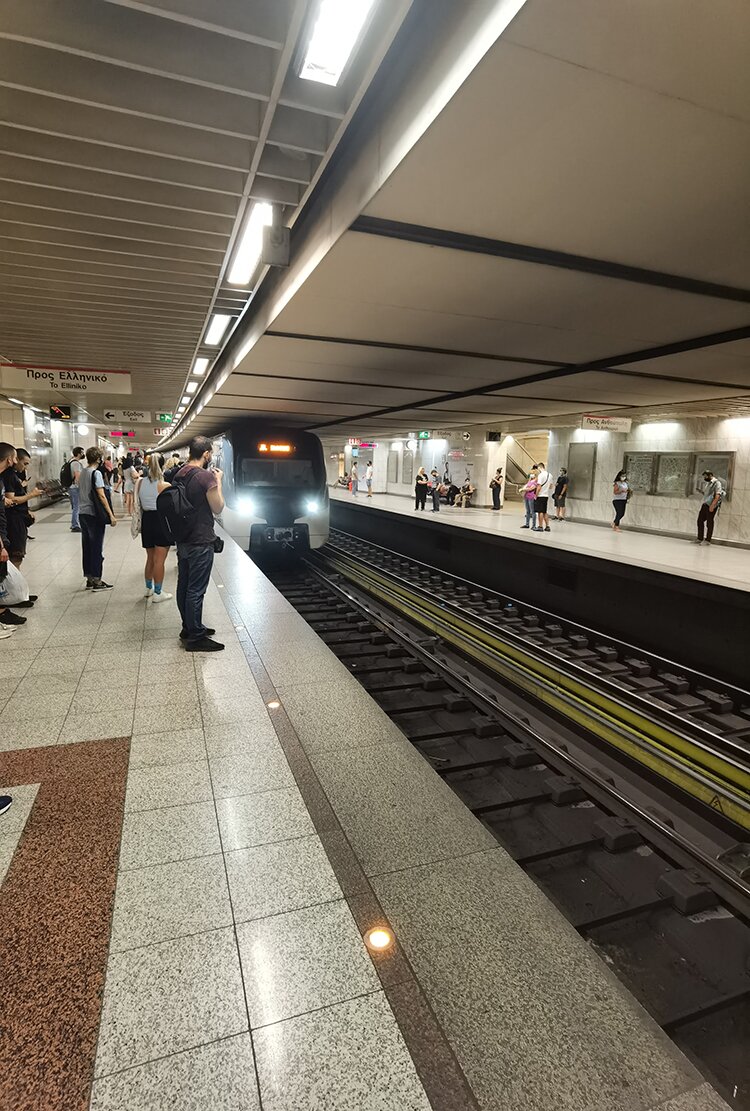 Here pay attention to the red line where the gentleman is standing. You should not cross it for safety reasons 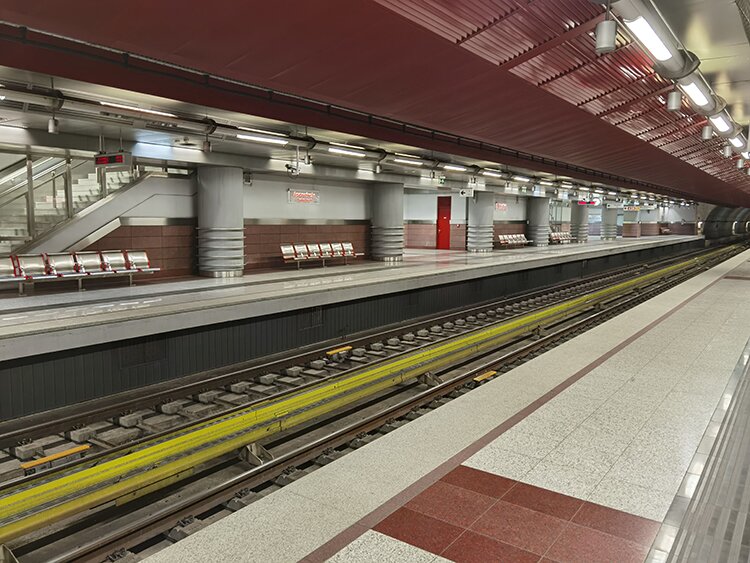 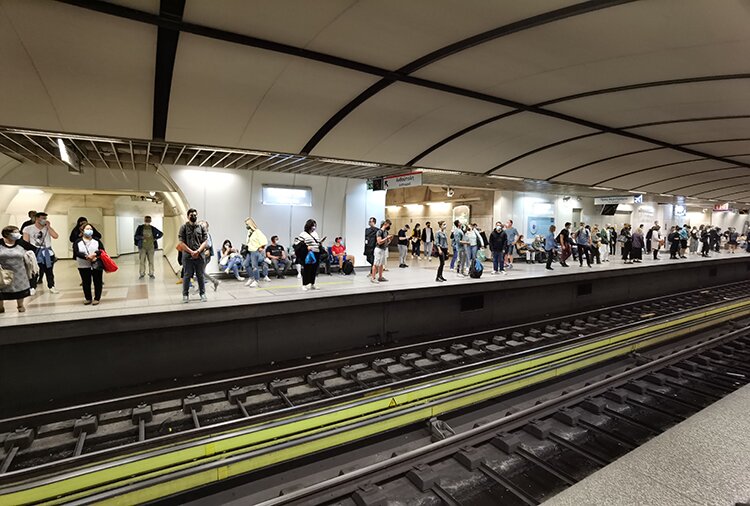 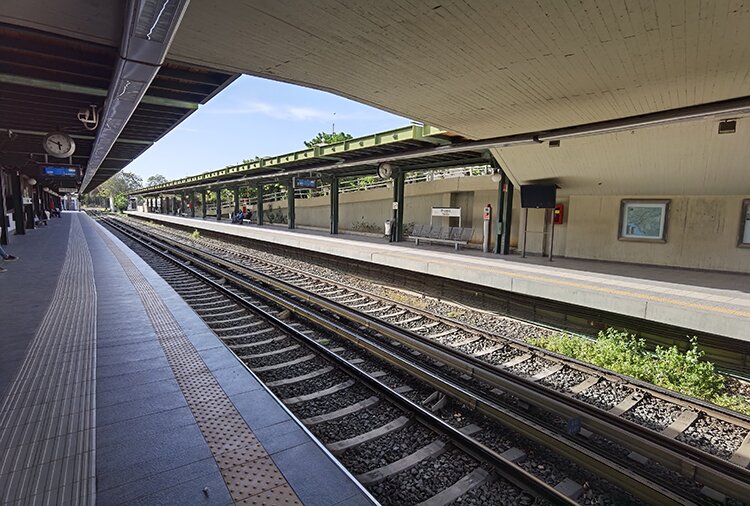 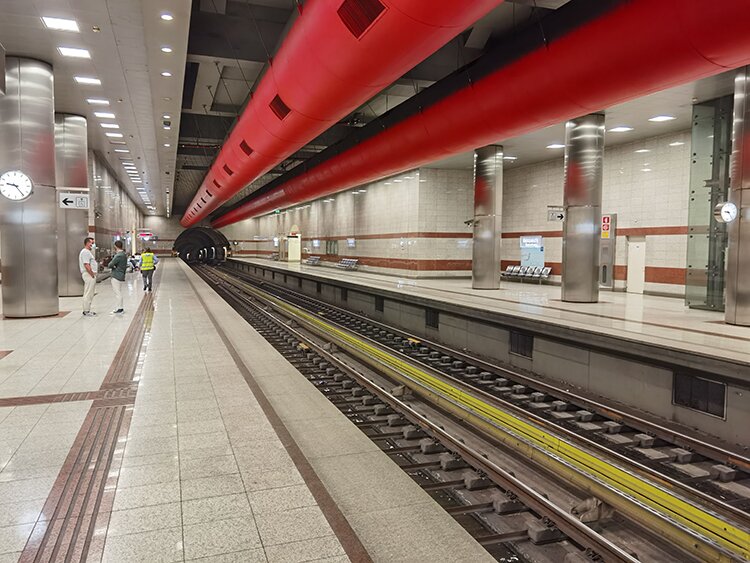 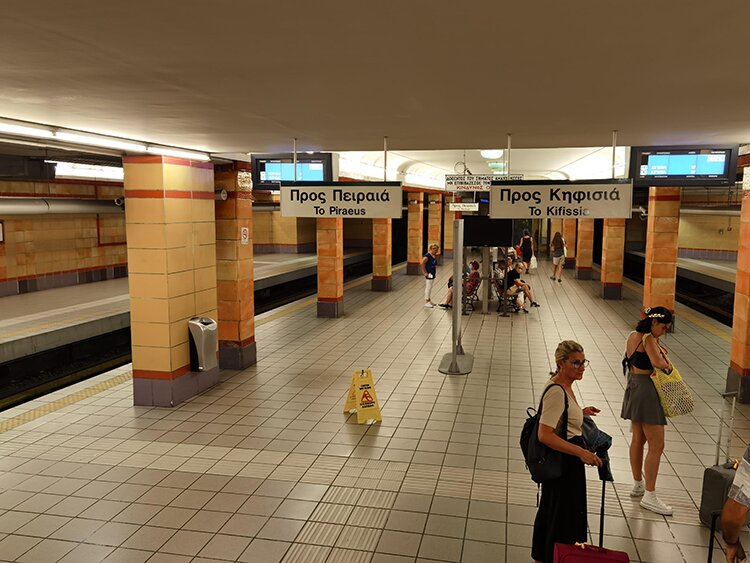 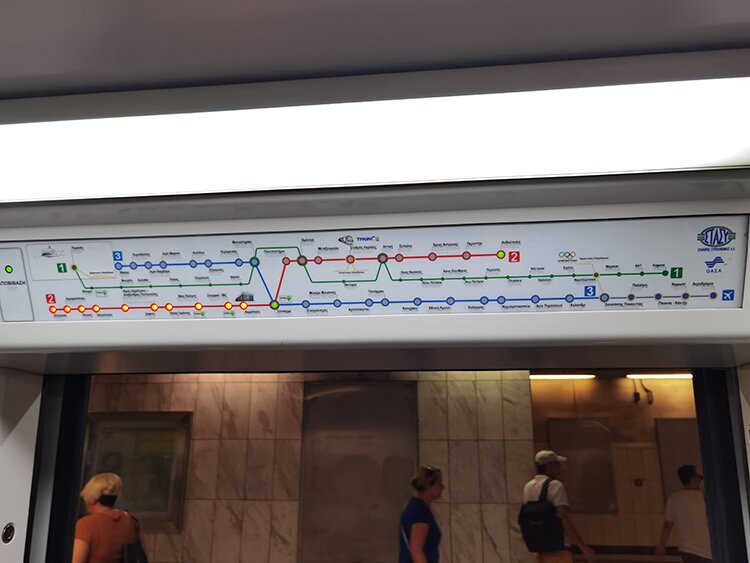